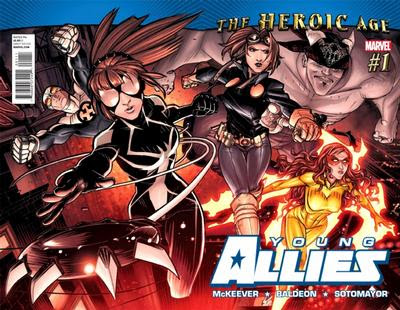 I dunno, you wait ages for a decent young hero team to come along and then two show up at once.

As well as Avengers Academy, Marvel this week brings us Young Allies, named for the Golden Age kid group book published by Marvel predecessor, Timely. That had a Bucky and a Toro, this one has a Bucky (currently going by Nomad) and a Toro. Mind, Bucky/Nomad isn't a gun-toting teenage Nazi-smasher but a patriotic schoolgirl, and Toro, rather than being a flaming boy, is a man-bull.

The new Young Allies also calls to mind the New Warriors, being a collection of old and fresh characters who, because they're not wanted elsewhere, are free to go their own sweet way. And in the shape of Firestar, there's even a former New Warrior (Amazing Friend of Spider-Man, Hellion, Avenger, Marvel Diva ...) on the team.

Filling out the ranks are Arana, the former Spider-Girl, and Gravity, who controls graviton particles (I don't actually know what this means, but he's as powerful as he is camply clad).

This issue sees the characters get together when wonderfully named teenage terrorists the Bastards of Evil hit New York. There's a big blast, they all happen to be in the area, they step up - in a city with as many metahumans as NYC, that makes perfect sense.

Other than Arana and Nomad, who are schoolpals as well as crimefighting partners, there's not a lot of interaction between the Allies-to-be this time out. Based on what writer Sean McKeever shows us of them individually, though, I look forward to the coming conversations.

There seems to be some intention that this group will represent America, which makes sense given the legacy of the YA concept. So we have patriotic wanderer Nomad, midwesterner Gravity, illegal immigrant Toro, Hispanic Arana and WASP-ish Firestar. We're not slapped about the head with the idea, but it's there and it'll be interesting to see if McKeever does anything with it.

McKeever seems much comfier here than during his recent stint on DC Comics' Teen Titans. The dialogue reads well, being neither declamatory nor wannabe Mamet. It simply conveys character while helping move the story along. The heroes are likable, the villains ... well, the clue's in the name, they're not nice people. But they're formidable, and fun to watch.

We first meet the Bastards of Evil in an unusually moody page. They're in tight close-ups, enveloped in shadow. It makes me eager for their daylight debut, and they don't disappoint.

McKeever's penciller partner is David Baldeon, whose layouts have a nice energy to them. Whether it's Nomad leaping across a shop to tackle street toughs, or Gravity defying BoE Singularity, there's a fun dynamism that pulls me in. I also like that Baldeon is confident enough to go with an occasional goofiness of expression. Actual cartooning, love it! The finishes by N Bowling work well, while Chris Sotomayor's colours pop, and pop again. Except when he's colouring Firestar in civvies and she has brown, rather than ginger, hair.

For the comic's opening Colombia-set sequence, letterer Joe Sabino uses a rougher font than for the rest of the book, to indicate translation. It's distractingly messy, and unnecessary given the translation brackets, but points to Mr Sabino for at least trying something new.

We're gifted a wraparound cover, with art by fan favourite David Lafuente, but I'd rather Baldeon had been given the assignment. Arana and Bucky look spiffy, but Toro resembles a pimp genie, Firestar screams 'emaciated witch' and Gravity looks to have lost his legs. Nice logo, though.

Given that there's not a single character in this book I'd consider a favourite - Firestar comes closest - I'm impressed I enjoyed Young Allies #1 as much as I did. A back-up feature helpfully recapping histories and powers ends with the legend: Five heroes against tyranny in all its forms. Five students pushing to make the grade. Five friends together on the road to adulthood. Friendship and the greater good - it's an old-fashioned excuse for a team book and one that suits this combination of characters. I'll buy it.
Young Allies #1 review