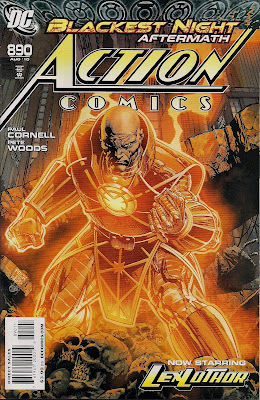 Another year without Superman in Action Comics. Weep.

Those would be the reservations. The five-star casino hotel would be the way Paul Cornell and Pete Woods execute the beginning of their Lex Luthor series. Having tasted Green Lantern-style power during recent cosmic shenanigans, Lex wants more and over the next year he'll be travelling across the DCU (and maybe beyond) in order to find it. Along the way he'll meet some of his rivals for the title of DC's Biggest Villain (oh please Lex, while I admit to being puzzled that a self-proclaimed, er, Brainiac, such as yourself can't even cure baldness, do feel free to show Deathstroke the Terminally Boring the door).

Now that's a pretty good set-up and the quality of this first issue guarantees I'm buying the book for as long as Cornell and Woods are on it. Lex is at his deliciously evil best, plotting grandiose schemes while displaying the self-knowledge of a dead gnat - John Henry Irons, Steel, is 'just a genius in a power suit'; Lex asserts that he's the best yet can barely get through a sentence without comparing himself to Superman.

The obsession is one way of guaranteeing that while his Kryptonian foe is off playing The Superest Hobo, his presence is a constant. The addition of one Lois Lane to the supporting cast is another. And despite my knee-jerk reaction to the announcement that Lex is taking over the comic, he is a darned charismatic character.

I'm also immediately fond of new assistant Spalding, a natty dresser with a dry sense of humour. Let's hope he survives the year. And while the issue's mystery villain is unveiled at the end (YES!) I'm dying to know more about his well-designed lackeys.

The designer would be Woods, who fills the book with believable people and environments. Lois is a standout, especially when we see her without her make-up. My one qualm is the decision to draw Lex without eyebrows, like the rather wonderful British swimmer Duncan Goodhew, who lost all his body hair after falling out of a tree (Superman, sadly, was busy rescuing a cat). Duncan, I'm used to, and he smiles a lot - Lex looks weird. 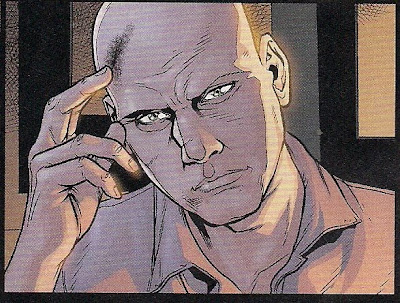