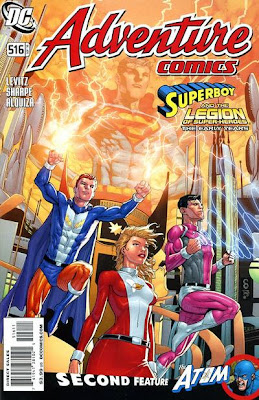 After last week's disappointing Atom Special #1 I was keen to see how the debut of his regular Adventure Comics feature turned out. Very well, actually. I won't harp on about what I saw as the special's deficiencies - the review is below, if you're interested - I will say that 'Nucleus part 1, Splitting the Atom' is a tiny treat.

After the stroke suffered by his estranged father, the Atom, Ray Palmer resolves to bring down whoever organised the recent break-in at his lab, and likely motivated his father's collapse. The word on the street is that supervillain turned information broker The Calculator is involved, but can Ray find him?

In the old days he'd simply have gotten hold of his phone number, and dialled himself down the phone lines and into a bad guy's hideout. Tech-god the Calculator, though, isn't going to just answer his phone, meaning Ray must try the decidedly more difficult travel route of the internet. Diving into a data stream, he must negotiate billions of bits of information, riding the information current in the hope he can reach the Calculator before he realises something's up. I've seen the Atom do the phone thing dozens of time, but writer Jeff Lemire makes the trick seem new again - and seriously impressive.

And as illustrated by penciller Mahmud Asrar, inker John Dell and colourist Pete Pantazis in a dynamite spread, it's amazing. The rest of the strip looks equally good, with imaginative storytelling that's never showy for the sake of it. Rounding off the core creatives is letterer Sal Cipriano, whose work is as sharp as ever ... the only change I'd like to see with regard to his work is in the production arena; Ray's narration is printed grey out of blue. How about making the words white, DC? My eyes are so very old.

The words themselves are excellent, as Lemire gets us inside the head of our hero, helping us to see why he's cool. The strip ends with a neat cliffhanger and you can bet I'll be back next month. On a historical note, I'm delighted to see Ray take on the Calculator, as the villain debuted in an Atom short back in 1976. Oh, and thanks for surprising me, Mr Lemire, and keeping Palmer Sr alive (well, when dealing with the DC Universe it saves time to assume folk are dead).

The Atom gets ten pages, with the other 20 going to the Legion of Super-Heroes. Paul Levitz continues to recap LSH history, with this instalment filling in the details of team backer RJ Brande. Newer readers may find the minutiae of how the LSH began interesting, but the 'three teens on a spaceship save the life of one of the galaxy's richest men' has never been a thriller. Levitz does his best, going so far as to give Brande a personality for the first time, including such a weirdly cod-German speech pattern that he'd fit right into Golden Age stereotypes of the skies, the Blackhawks (actually, he does look somewhat like Hans).

There are some new details to provide spice, such as the possibility that Brande is Chameleon Boy's mother as well as his father, and Superboy's role as Legion inspiration going back a little further than previously revealed. But at base, this is a history lesson. A hologram of the recently deceased Brande tells his story to listening Legionnaires, all of whom already know most of it. It doesn't make for great drama. It does make me wish Levitz hadn't taken fellow writer Geoff Johns' challenge to produce a Legion primer without it turning into a Cliff's Notes. Sadly, if there were a Legionnaire named Exposition Lass, this would be her favourite comic.

Then again, as a Legion fan of old, I'm hardly the audience this story is aimed at, and it's entertaining enough. The artwork by penciller Kevin Sharpe, inker Marlo Alquiza and colourist Blond is fine - there's not a lot of room in the script for them to go wild. Everyone looks good, the story is told ... but whose idea was it to change Brande's homeworld shape from tendril-headed monster to fish fella? Now that's just weird!

The cover by Scott Clark and David Beaty is attractive, though the Superboy visual fades into the background some - stronger colour, please, unnamed artbot, though I love the overall orangieness! Still, it's Adventure Comics starring Superboy and the Legion of Super-Heroes, so it's a winner on nostalgia value alone. A half-decent story - and this was more than that - is a bonus. The excellent Atom strip ensures Adventure Comics #516 is a winner.
Adventure Comics #516 review