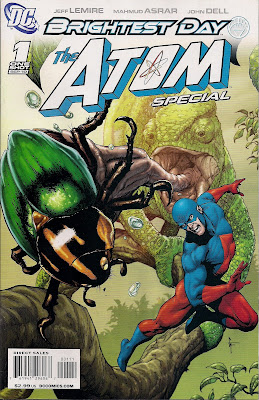 Ray Palmer's Ivy Town lab is broken into while he's tackling a hostage situation in the local library. He reminisces with his old mentor, Professor Hyatt, about his origins - family and superheroic - before a final page shock.

Well, it's a shock if you've not read enough recent DC comics to realise that the mention of a previously unknown relative in a book featuring the Brightest Day banner can only mean one thing. So it is that someone departs this life and ...

... oh the heck with it, let's go major spoilers here. Ray's dad is found dead. Our hero looks sad, but it's likely he's intellectualising the emotion rather than feeling it because he's barely spoken to him in years.

Happily, Ray has another 'brand new' relative, who may hold the key to the break-in and unexplained death. It's Uncle David, the man we're told was kind to timid little Ray in a way his father/Chekhov's Gun never was. Mind, Ray's not seen him in years, and has never asked his dad what happened to him.

It's all very odd. Ray Palmer, superhero, super-scientist and Super-Friend, has few feelings for his closest living relative, and no curiosity about the relative who was kindest to him. His dad never leaves his apartment, watches TV all day, but Ray apparently wasn't much bothered.

Then there's the presence of Prof Hyatt, here compos mentis, yet brain-addled when last seen in the DC Universe, just a few years back during Ryan Choi's tenure as the Atom. Oh, and he always knew Ray's super-secret, having been present for the arrival of the meteor carrying the white dwarf star fragment.

And we're told Atom's secret identity is known only to Hyatt and his meta-human mates, despite it having been spilled in a tell-all book years ago.

What's more, the incredibly weird Ivy Town inhabited by Ryan Choi seems to have gone and it's just a sleepy college place once more.

In his origin, Ray wasn't trapped in caves and forced to use his experimental size-changing system for escape, he went in there to save schoolkids, clad in a creepy blue bodysuit.

David Palmer is Ray's uncle rather than his dad and his mother was no longer around when Ray was growing up. But he had a brother, Danny! Oh dear, Danny's dead now ... (Hey, wouldn't it amaze us all if David actually is Ray's Dad, explaining why 'Dad' favoured Danny but David liked Ray? Deep.)

Does writer Jeff Lemire realise Ray Palmer and his world have appeared in comics prior to this week?

I think it's safe to say we're talking soft reboot here. One of DC's fortnightly reality rewriting crises has changed things. For all I know, it might even have wiped out Ryan Choi, as not only is there no mention of his death, there's no reference to him at all. I realise that a one-off special kicking off Ray's return as DC's no.1 Atom needs to focus on him, but even if this takes place before Ryan's murder, a tiny mention of his supposed protege would have made sense.

I might go easier on the continuity crushing were the tweaks facilitating a great story. Sadly, the tale is dull. A bog standard Atom vs non-powered criminals tussle, tons of expository dialogue with Ray telling Hyatt loads of stuff he knows and no resolution as we're meant to follow the story into a back-up strip in Adventure Comics. It's all very average. As a Ray fan of old, I'm trying not to say 'DC dumped Ryan Choi for THIS!?'

But ... DC dumped Ryan Choi for THIS!? Ryan's madly entertaining book was full of weird people in a weird town, with his everyman personality making things seem all the nuttier. This comic has a whiny Ray keener to reminisce than solve a mystery. If this were an ongoing, I'd be jumping off right now. As I already buy Adventure Comics, the strip gets a second chance. Now that the origin has been thoroughly recapped (what do we really need other than 'Ray invented a shrinking device?') there's a decent chance the pace will pick up.

The artwork by Mahmood Asrar and John Dell tells the story well, it's just a shame they don't have a more exciting story to illustrate. The one that went with Gary Frank's smashing cover would have been a good start. Sadly, there are no fights with beetles, lizards or blobs here. There's just me, fighting to stay awake.
The Atom Special #1 review