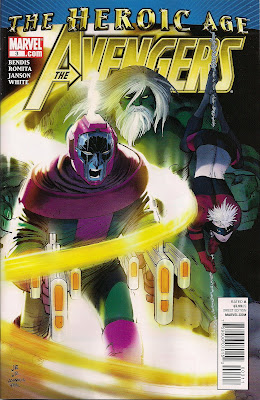 At the end of last issue the Kang time travel storyline finally started to show signs of forward movement, as Apocalypse appeared, joined by some rather fearsome-looking new horsemen. A master planner such as the X-Men enemy was bound to throw some spanners in the works for the Avengers.

Not so much, as it turns out. This month blasts aplenty, but no useful bits of information, are exchanged by the Avengers and the newcomers. The heroes banter inanely (quelle surprise), Apocalypse makes a few vaguely threatening comments, a couple of lackeys manage a 'Master' but the fight seems to be going nowhere. 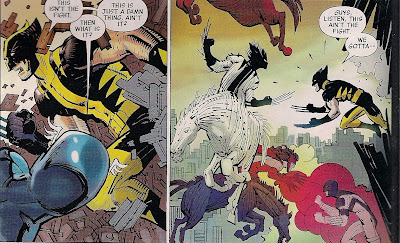 Ah, right. It is indeed a meaningless fight, padding the issue out. Shouldn't team geniuses Spider-Man and Iron Man have cottoned on too? Probably not, given there's no real deduction involved on Logan's part, just a vague feeling. And the most excitement the latter pair see is when Spidey saves a falling, de-armoured Tony Stark with his webbing (hurrah, two pages filled, no imagination necessary).

Never mind the heroes, it's the reader who's truly in time travel hell, with a bad case of deja vu. You could skip this comic and be no worse off in terms of keeping up with what story there is - the issue admits the skirmish is pointless. Marvel hasn't even bothered with an issue-specific cover - Kang, the Maestro and Future Spider-Person are all absent from the issue.

This was going to be my make or break issue, after two months of disappointing story and below-par artwork. While far from their best, the visuals from John Romita Jr and Klaus Janson are improved on previous issues (although having recently been replaced by a Skrull, it seems there's now some sweaty crone impersonating Spider-Woman).

But the script has deteriorated. Nice guy that writer Brian Bendis is, traditional Avengering just isn't his forte - the grandiose stories with mad, characterisation-filled fights that serve the plot ... they're not here. New Avengers, as was, was tailored to his strengths - character banter, conspiracies, 'street-level' heroes. I thank him for at least trying to please old school/fart fans such as me with the likes of this latest book, and Mighty Avengers before it, but it's time to step away. Hand this latest reboot over to a Dan Slott, Jeff Parker or Paul Tobin, someone more keyed into the Roy Thomas/Kurt Busiek Avengers school.

Until then, I'm dropping this comic. It isn't working.
The Avengers #3 review