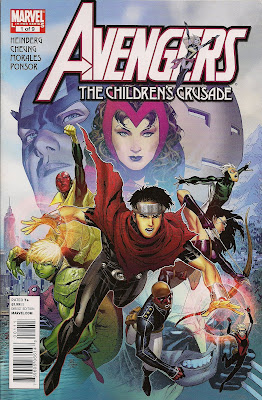 It's been too long. Too long since Allan Heinberg and Jim Cheung brought us a tale of the Young Avengers. The best thing to come out of the Avengers Disassembled debacle, the teens starred in a series which proved short-lived more due to Heinberg's other commitments than sales and reader interest. Over the last few years we've had the kids in dribs and drabs - a mini-series here, a crossover there, a few one-shots - with other creators doing a bang-up job of maintaining tone and character. Yet Marvel never gave anyone the nod to continue the ongoing.

There's still no sign of a regular book, but we do have Heinberg and Cheung back with this nine-part series following the Young Avengers on a quest. And it really is wonderful to see the team back with their two dads.

The characters are swiftly reintroduced in battle as the Sons of the Serpent hiss hatred at sweethearts Wiccan and Hulking. The conclusion of the fracas sees the adult Avengers keen to take Wiccan in for tests, fearful he's going to go mad with power a la his likely mother, the Scarlet Witch. The Young Avengers have other ideas ...

The personalities of the players burst off the pages, as Heinberg shows he's not lost his knack for building chemistry. And Heinberg's plot, well, may I just say thank you, sir. Wiccan voices doubts I had about the Disassembled story (the unwillingness to consider Wanda was being manipulated, the involvement of Dr Strange) and the team plans to uncover the truth, or at least snap Wanda out of her funk.

The only thing I wasn't keen on was the back and forth spouting of Biblical verses, something that happens all too-often in fiction and never in my own experience. On the other hand, full marks for getting the word 'invert' into a Marvel comic - that has to be a first.

The artwork by Cheung, inker Mark Morales and colourist Justin Ponsor is nothing short of gorgeous. The fights can be followed, the characterisation read, the backgrounds appreciated; it's an obvious labour of love for all concerned.

My big hope for this series is that the Scarlet Witch's reputation, along with her mind, will be rehabilitated. Whatever the outcome, I'm going to sit back and revel in nine issues of accomplished superhero drama starring characters whose originality belies their origins
as spin-offs.
Avengers: The Children's Crusade #1 review