Batman: The Brave and the Bold #19 review 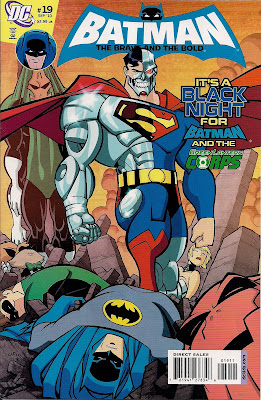 Departing from the usual mix of action and whimsy, this is a solidly serious issue of Batman: The Brave and the Bold. We don't even have the usual prologue featuring a different character from the issue's co-star - here it's Green Lanterns all the way. So how is it?

The Cyborg Superman, Hank Henshaw, wants Hal Jordan's power ring, but when he captures Earth's Green Lantern, the trinket flies off to seek help. In no time at all it finds Batman - at the good old Ace Chemical Plant - and names him a Green Lantern. Rather than embrace the power, Batman continues his fight with Scarface as if nothing has happened. After that, though, he's soon embroiled in a space saga with Hal, Henshaw, the Green Lantern Corps and the Manhunters.

Writer Adam Schlagman fits an awful lot of lore into 20 pages (a couple of editorial pages are handed over to puzzles and reader artwork) of a suddenly shiny Brave and Bold ... the paper stock has been upgraded and the price bumped up by 49 cents, not a move guaranteed to help sales as this wonderful comic approaches cancellation at #22. Happily, as a former DC Comics editor, Schlagman can structure a story without things getting confusing. I know that as a kid I'd have loved to learn all about the GL Corps, their friends and enemies in a single comic (which, of course, we could back in those days when done-in-ones were the norm).

And while I'm not usually a fan of near-radioactive paper, the better stock really suits former Impulse artist Carlo Barbieri's bombastic pencils, as inked by Terry Beatty and coloured by Heroic Age. Every page pops with power-ringed goodness, and while we've seen Batman as GL previously - in the Elseworlds In Darkest Knight book by Mike Barr and Jerry Bingham - I much prefer Barberi's less gloomy design. And the emerald constructs Batman comes up with when he finally lets loose with Oan energy are delightfully apposite.

So yes, this issue eschews the lightness of tone I associate with this comic, but there's nothing wrong with a quality change of pace, and the title remains a darn good all-ages read. I just wish it was remaining for a lot longer.
Batman: The Brave and the Bold #19 review