The Brave and the Bold #35 review 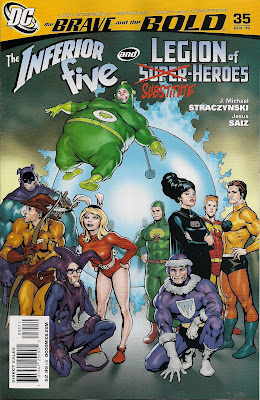 Michael J Straczynski is a versatile chap. On the one hand, there's this week's Superman #701 which is, to say the least, a sober comic. On the other there's this confection, a team-up between two of DC's lesser-known teams. I've always loved the Legion of Substitute-Heroes, the plucky Legion of Super-Heroes rejects who built their own legend. And the Inferior Five, wow ... er ... I've never actually read an issue of their short-lived Sixties book, but I've seen their cameos down the years (could we have a Showcase collection please, DC?) and wanted more.

Now here they are, together for the first time. As in their previous starring roles, in the Eighties, the Subs are dafter than in their LSH appearances, even making the Inferior Five look smart at times. Some purists will complain, but I'm all for the odd comic story that dares to be both comic and odd.

The story has the Subs hearing of the 'real' Legion's triumph over a black hole and deciding to steal their thunder by taking a time bubble and saving the day first, relatively speaking. But lack of mathematical nous means they fail to snag the day-saving Doom Patrol, as managed by the LSH in last month's Brave and Bold (still on sale and well worth buying). Instead they're stuck with the frankly delightful Merryman, Blimp, Dumb Bunny, White Feather and Awkwardman - the Inferior Five. Cue a back and forth tale of mad science and madder heroes that's one of the best mainstream comics I've read in ages.

Puzzling moments from last issue are explained, as the Subs manage to show just why, despite their pretty decent powers, they're not ready for superhero prime time. The issue is capped off with a surprise that will hopefully prompt more Inferior Five appearances ere long. Perhaps they'll meet Superman on his road trip ...

Straczynski is on fire, cranking out some splendid gags while keeping the cause and effect thread clear for us science dunces. And Jesus Saiz has a ball with the artwork, letting go with the goofiness necessary to make the story sing (click image to enlarge). 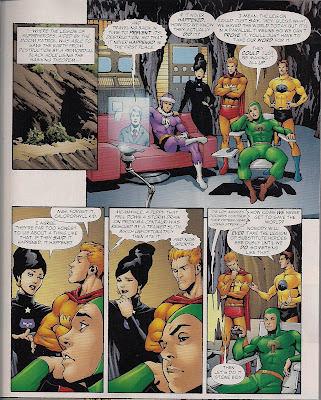 The man was born to draw Night Girl's beehive, and if he's not channelling the Big Bang Theory's Jim Parsons into Chlorophyll Kid, I'll be a three-eyed Kryptonian babootch.

Comics which embrace the loonier aspects of the DC Universe are always welcome. It's not easy to get it right - the last Ambush Bug mini, for example, proved less than I've come to expect from the creators involved - but this story is a tiny treasure. It made a very wet day much brighter.
The Brave and the Bold #35 review