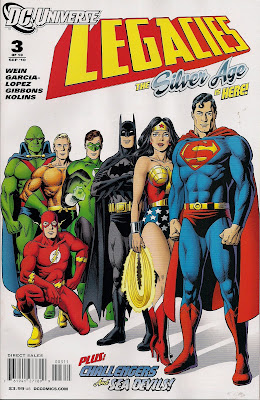 Last issue we saw the Justice Society retire due to the Communist witchhunts of the Fifties. As we rejoin narrator Paul Lincoln he's out to help fill the gap left by the heroes who inspired him as a kid. He joins Metropolis PD and soon finds himself partnered by one officer John Jones.

And then the heroes return, a decade or so after the JSA vanished. Superman debuts, followed by Batman, Wonder Woman ... all the original Justice League members, including J'onn J'onzz, Manhunter from Mars. Paul - husband, father and indulged fanboy - couldn't be happier, though he's sad when pal Jones takes a job as a detective in Colorado. If only Paul knew how close he'd been to one of his heroes ...

There are no amazing new revelations here, just one minor, enjoyable continuity implant. There's no gore or 'dramatic' deaths. If Len Wein's script is old-fashioned that's because he's nodding towards substance rather than flash. God is in the details - the ongoing story of Paul and boyhood pal Jimmy, his love for Jimmy's sister Peg, the reactions of the man in the street to the second coming of the mystery men, Paul's logical assumption that the new Flash is the old one in a changed costume. And so on. Particularly clever is the way Wein includes the Western characters who overtook the superheroes in publishing popularity during the 1950s. Who knew Fess Parker never influenced fashion in the DC Universe? DC's sci-fi books, Mystery in Space and Strange Adventures, are also integrated into the narrative in perhaps my favourite page (click to enlarge). 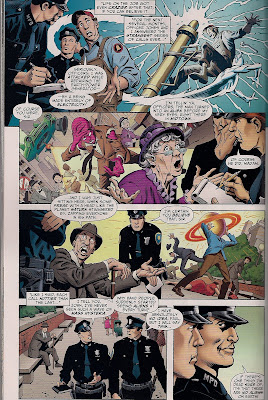 The choice of artists on the main run is smart (Scott Kolins again does a nice job on the 2pp framing sequence). Seventies stalwart Jose Luis Garcia-Lopez provides beautiful layouts which Eighties star Dave Gibbons finishes in a rare inking job. Together they capture a Sixties sensibility even though their work always looks modern. I've not seen this combination of artists before, but they make magic and I'd love to see at least an entire mini by them. They also produce that gorgeous cover. Can you say 'iconic'?

Non-powered adventurers Cave Carson and crew, the Challengers of the Unknown and the Sea Devils cameo in the main story, and star in the back-up. Len Wein provides a short and very sweet treble team-up, with Gibbons going solo for eight fantastic pages. He could very well be the greatest artist these teams never had.

Yes, Legacies is a bit like Marvel's Marvels, in foregrounding the man in the street rather than the heroes. But lots of comics are a bit like other comics in theme. The execution here is different, the universe is unique and the comic is wonderful.
DC Universe Legacies #3