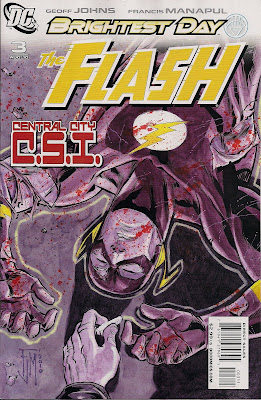 I'm not at all keen on Francis Manapul's cover image, which is irrelevant to the issue, murkily executed and saddled with rubbish copy.

Inside, things are somewhat happier, as the Reverse-Rogues from the future return to arrest Barry Allen for a crime he hasn't yet committed and Captain Boomerang finds that his bounce back from death has given him the ability to manifest killer 'rangs. When not being attacked, Barry is mulling over a murder conviction and being yelled at by his boss. And the future cops hint that Iris will be breaking a few laws before long.

She's already breaking the laws of credulity by looking about 20 years younger than she should. This issue Iris even jokingly brags about her loveliness; I wish writer Geoff Johns would give us a sentence or two at least acknowledging that Iris has seriously de-aged since the Wally and Bart Flash books. As this comic seems determined to tell convoluted time travel tales, he may as well acknowledge Iris's crazy past/future rather than leave longer-term readers wondering if she's been nicking the bodies of younger gels again..

Points, though, for giving the Barry/Iris relationship a few pages this issue, showing that they love and rely on one another. And I appreciated that without being overly cocky, Barry wasn't perturbed by the 5-1 odds against him. The issue ends on a fun note before an entertaining, two-page surprise look at Captain Boomerang's MO via Flash Facts, by Johns and Scott Kolins. 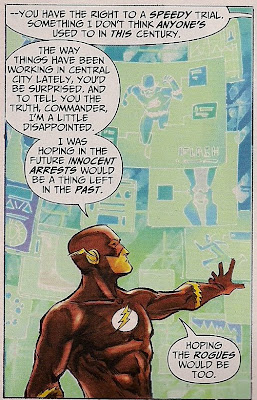 Oh, and there's a wee gag for those of us who endured the Flash's seemingly never-ending trial (actually, ten issues, which would count as a short these days) for killing Professor Zoom back in the Eighties.

Manapul's art on the main story continues to give the book a speed-charged atmosphere, as Flash roars around a buzzing Central City, the crime lab throbs with activity and Jitters coffee shop judders nervously. Brian Buccellato's colours remain, for the most part, attractive - the green-dominated opening scene at Iron Heights jail looks particularly good - but I'd be happy to see the hot colours that dominate the fight scenes toned down a tad; my eyes are a-hurtin'.

Still, this is my favourite issue of the returned book yet, as Barry settles back into the world and tries to make it better. He could do with being a little less passive at work, but it's early days.
The Flash #3 review