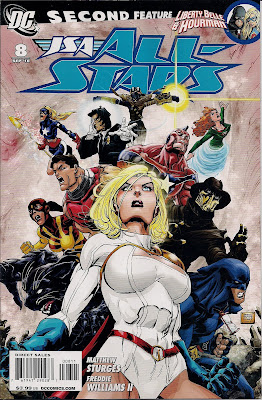 In the beginning, this comic was about a serious bunch of souls who felt they needed to act like a military unit in order to be effective. It was a pretty good read, but never really ignited.

This issue, the sparks fly. And it's nothing to do with a massive villain, or a big death; the villains here are monkey men riding tigers (novel), a giant spider ('there to go squish') and dead cult members (particularly ineffective).

It's everything to do with writer Matt Sturges and artist Freddie Williams II seemingly relaxing into the book. The super-soldiers idea has been downplayed and instead we're spending time with a bunch of friends who adventure together. The 'loss' of the ultra-grim, gung-ho Magog has defused tensions, allowing the characters to relate not as soldiers, but as people. So we have Hourman and Atom Smasher reminiscing about their days in LA with Infinity Inc; and jokes about the latter's old mohawk, the biggest tragedy ever to hit any superhero team. There's Power Girl casually chatting about the return to life of old Infinitor team-mate Jade, and lecturing resident hologram Roxy about the need for a modest appearance (Power Pot meet Kryptonian kettle).

Actually, given the appearance here of Infinity Inc supporting character Chief Bracken, and the arrival of a red-haired telepath I'm assuming is another former Infinitor, Brainwave, I'm wondering if a name change isn't in the offing for our super-squad. Either that, or Sturges has been reading back issues and is simply feeling nostalgic.

While there is a tussle, as the team follows the trail of a drug trafficking cult (who debuted in, you guessed, Infinity Inc) to South America, this is basically a Day in the Life issue. Pioneered in the Eighties by New Teen Titans, Legion of Super-Heroes and Avengers, when done well these act as breathers from longer arcs, allow us to check in with the characters away from the battlefield, and set off subplots that blossom later.

New strands here include the mystery of King Chimera's lost love and Anna Fortune's beginnings in the early 20th century. I look forward to seeing how they pan out. There's even a new super-plane, something every good super-team needs. It's sleek, like an Avengers Quinjet of old, but needs a flashy livery ... at the moment it might ass well be called the JSA Generic, not the Star Eagle (hey, didn't Infinity Inc have a vehicle called the Steel Eagle?).

The A-plot sees a mysterious chap, somehow tied to the Parador cult, worrying about the team as they battle weird jungle creatures. He's allowed to take over the narration, a privilege usually afforded only to heroes. Add in his telepathy, the red hair and a conflicted nature and a brainwave squiggle in his thunk boxes and you see why I'm thinking Henry King Jr, Brain Wave. He was a hero, then a villain (it's OK, it was just a phase Mr Mind was going through) and when last seen was being rehabilitated. Follow this bit of intrigue with a cliffhanger as a team member is gutted as physically as, earlier in the issue, she was emotionally, and there's no way I'm missing next issue.

A big part of my enjoyment is the incredibly enthusiastic line of artist Williams. Compared to earlier issues, his digital illustrations look remarkably clean, the figurework and facework less awkward. The exaggerated shots of Power Girl's boobs are gone - they're still big, but they're not asking for their own series. Instead, I'm noticing the level of detail in backgrounds, the attention he's giving to individual posture and movement. It's very impressive. Colourists Richard and Tanya Horie make the most of the various settings - warehouse at night, hi-tech HQ, daytime forest, South American jungle - while letterer Pat Brosseau renders the script with crystal clarity.

And there's more. Namely, the Liberty Belle and Hourman strip, co-starring the villainous/villain-ish Icicle and Tigress. The ins and outs of the Indiana Jones-style storyline have long since turned into goo in my head, but who cares - it's the surprising, delightful dynamic of the four main players that has me smiling from beginning to end. A round of applause for Jen Van Meter on words and Travis Moore and Dab Green on artwork.