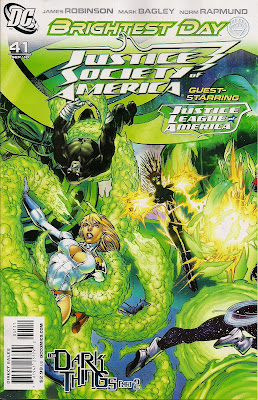 Any less long-in-the-tooth DC fans out there willing to tell me what they're making of the constant cameos from obscure characters in James Robinson's recent scripts? I love it when we're reminded that Naiad is still around, or Faust. Or, as in this second part of the current back and forth JLA/JSA team-up, Yellow Peri and Devastation.

But what about fans who have to go running to Wiki to learn that, say, Yellow Peri was a pre-Crisis Superboy and Superman semi-villain who was obscure even when she was the featured antagonist? Is it annoying, or can you enjoy the characters as background colour alone?

Questions, questions ... This issue is brought to you by the colour green, as the Starheart, a cosmic mcguffin connected to original Green Lantern Alan Scott, continues to send DC's mystical metas mad. The JSA splits into teams, with some members battling the immediate threat while others try to glean enough knowledge to stop it. It's a fine issue, from the sneaky opening with Miss Martian to the arrival of a new ally at the close. In between there's some nifty character work involving Jay Garrick Flash, Wildcat and former Outsider Faust; a smart scene showing that the Justice League know how to think through a threat; and, wonders never cease, a vignette in which Lightning and Mr America find each other, and their personalities.

That's not to say the entire issue isn't full of well-differentiated characters, from never-say-die Donna Troy to war-weary Congorilla via pithy Citizen Steel. All this and the introduction of the idea that DCU prison guards are tested for latent super powers ... and some have some really crappy ones. 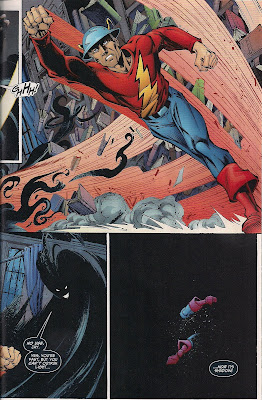 Along with the use of Lightning and Mr America, the big revelation this issue is the artwork. Penciller Mark Bagley has been inked by Norm Rapmund previously since he took over the JLA book, but never - so far as I can see - for a whole issue. In this crossover to JSA, though, it's Bagley/Rapmund all the way and the result is startling ... in a great way. Rapmund's delicate line weights ensure figures look lighter and faces lose the gaunt look that has bedevilled Bagley's DC work. There's an attractive airiness to the work that has me hoping these two are joined at the hip from now on.

And then there are the colours of Allen Passalaqua. This guy is good, bringing the finishing touches that make good comic art look great. He knows how to light a scene and how to light up a character, directing our eyes to the most important elements without adding in daft big ACME arrows. It's an impressive showing.