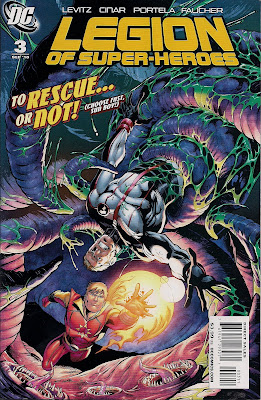 Reluctant Legionnaire Earth-Man is forced to abandon the team when his new Green Lantern ring compels him to fly off and, even more reluctantly, help some extraterrestrials. Lightning Lad join Saturn Girl in the search for their kidnapped sons. And hypnotic mentalist Saturn Queen continues her one-woman war on the Legion.

Those are the bare bones of this third instalment of the reborn Legion. Warming them are some gripping action sequences and sharp character development. Both show that DC made a wise decision in having longtime Legion writer Paul Levitz return to the team which made his name. Even decades after he last wrote them, there's no one to match him when it comes to showing members' powers in interesting ways, or opening up their personalities without going over the top. For example, Brainiac 5 here uses his traditionally protective forcefield as toughened armour, and we learn that Lightning Lad has something of an eidetic memory.

The incidental detail is fascinating too, such as the revelation that self-immolation is virtually a hobby among Saturn Queen's people. Who, incidentally, weren't the Lanothians we saw populating Titan in the telepathic planet's recently revealed origin.

A couple of pages are devoted to subplots bound to lead down intriguing alleyways, and while the note on which the story closes isn't a movie serial cliffhanger, it scores 10 out of 10 in terms of foreboding.

When this book started I really wasn't looking forward to the addition of the xenophobic Earth-Man, so am surprised to find his mini-Green Lantern adventure here so compelling. It helps that, without having his nature flip 360 degrees, Levitz is toning down Earth-Man's scumbaggery - he at least seems to want to be a hero.

And with this being one of DC's extra-length titles, several pages devoted to an individual focus doesn't derail the storytelling; I look forward to many more, spotlighting characters who are already favourites (pretty much everyone this side of any version of Karate Kid). Before that, 'Earth-Man's Choice' offers loads of little moments for the side-players in this first arc - Sensor Girl, Phantom Girl, Shadow Lass, Brainiac 5 ... they're all on impressive form. And Invisible Kid just has to drop in some of his random French words and maintenant I'm charmed.

Just three months in, and Levitz is weaving a rich tapestry I'm hoping goes on for a good while. With direct connections to the 21st century severed, the Legion's corner of the DC Universe has a chance to shine.

Adding several layers of polish are the art teams of Yildiray Cinar and Wayne Faucher, and Francis Portela and, er, Francis Portela. While they take turns at bat throughout the issue, Cinbar and Portela's pencilling styles are similar enough that there's no jarring disparity. And they're drawing different sections of the tale, which helps. It's good, clear storytelling all round, with every action and emotional beat hit.

Among tons of terrific moments this issue, there's Cinar showing the real love between Saturn Girl and Lightning Lad without sappy looks, and Portela foregrounding the inspiring moxie of Phantom Girl. The anonymous colouring droid at Hi-Fi, and letterer Sal Cipriano, bring their own skills to the mix and help ensure a good-looking, readable comic.

If you've not tried this book yet, please, give it a go. Legion history is present, but doesn't overwhelm. Characters and plot points are succinctly introduced as necessary. The script is smart and the art looks great. The logo is pretty ...

... OK, that last one is a tad desperate - but I want you reading this book. I believe you'll like it a lot. The Legion haven't survived 60 years and 402 reboots for nothing, you know. The concept of young heroes in a shining, yet ever-threatened, future is a grabber. The characters demonstrate infinite variety. And when a creative team gels, the series flies. Right now, we're going into orbit. Grab a transuit and enjoy.
Francis Portela Hi-Fi Legion of Super-Heroes Paul Levitz Sal Cipriano Wayne Faucher Yildiray Cinar