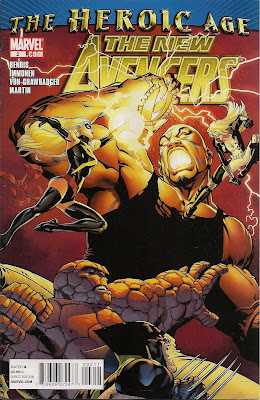 Earth's Mightiest Heroes united against a common threat! On that day the Avengers were born to fight the foes that no single hero could withstand! So goes the legend attached to hundreds of Avengers stories. It's dramatic, concise and challenges creative teams to come up with stories worthy of the brightest and best.

And on this day the New Avengers prove that while they may be Earth's Mightiest Heroes, they're far from its cleverest. The Rubbish Avengers? The Thicko Avengers? The Soppy Girlie Avengers? Any of these would do, but Mighty? Not so much.

The team is fighting one of their own, Giant-Sized Luke Cage, who's possessed and pissed off. The force inhabiting the hero wants the mystical Eye of Agamotto, which Sorcerer Supreme Dr Voodoo has given to him for safekeeping.

The Thing - Fastastic Four founding member, crack pilot and victor in dozens of metahuman conflicts - is presented as brainless, wondering why he's being tasked with getting the Eye away from the bad guy.

Spider-Man, asked by Jessica Jones to take her baby to safety as all hell breaks loose in Avengers Mansion, leaves the kid upstairs, alone: 'Baby's asleep. I got the baby monitor' Very responsible. When not failing at babysitting he's collecting kitchen paper to help mop up poor Dr Strange.

Guest stars Dr Voodoo weeps and the Son of Satan wails because they lose this round and the skies are on fire.

Also on hand is Hawkeye, who appears in about four panels and does bugger all; Ms Marvel, who at least shows she has her brain switched on before being swiftly dispatched; Jessica Jones, who gets a few punches in; and Iron Fist, who gets possessed too.

Overall, it's an appalling performance from a group of veteran heroes. There's no teamwork, no strategy - just a lot of running around like headless chickens. I get that we can't have the team all blase, speedily defeating a foe on the basis that they've faced this situation a few times previously. But this comic goes to the other extreme, presenting the players as startled does, hardly able to believe they're having to face a foe no single hero could withstand.

The treatment of Spidey particularly grates - sure, he's a funny guy, but the humour comes mid-battle, not as he stands around, doing anything but get involved. He's meant to be not simply Amusing, he's supposed to be Amazing.

I suspect writer Brian Michael Bendis was aiming for some comedy action, with the Eye of Agamotto bouncing around New York, but if so, it didn't come off.

What is good about this issue is the artwork of Stuart Immonen and Wade Von Grawbadger. It's big, it's brash, it's gorgeous to look at.

It's not enough to save the day. Last month I said I'd be with this book for awhile. This month, I'm changing my mind. I don't want to shell out good money to see an Avengers team who could be punked the Great Lakes branch. I'm out.
The New Avengers #2 review