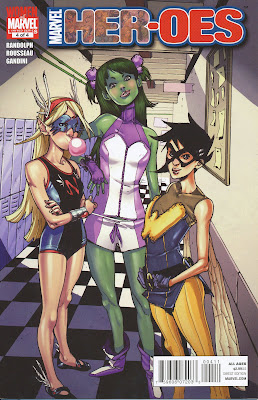 Her-Oes graduates to its fourth and sadly final issue as Janet, Namora and Jen end one adventure together and draw up plans for future ones. The issue begins with the heroic triumvirate using their unique abilities to defeat Moonstone and her yellow-clad (and fashionably blind) henchmen at Namora’s mansion. While Namora and Jen fight with confidence, Janet struggles against Ghost Shocker and her own anxiety (highlighted well by her stress-induced tears) drawn by Craig Rousseau and colored by Veronica Gandini (click to enlarge). 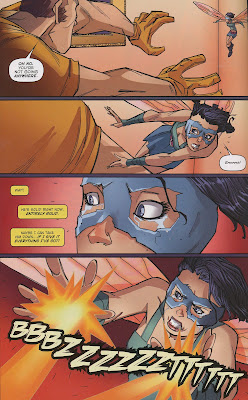 With last-minute guidance from Miss America, Janet zaps and defeats Moonstone and thus foils the villain’s plans to abduct and sell Jen to a “Professor Sterns.” The remaining plotlines are resolved neatly as Janet and Wade opt for a movie instead of the basketball game (to the thinly veiled annoyance of Namora), and Janet starts helping out on the school play. Despite government warnings not to use her powers, Janet, out of defiance and distrust, decides to form a secret team with Jen and Namora to protect themselves from potential threats. The story ends with Carol Danvers being considered for recruitment after Janet watches her redefine the term “air ball” by floating above the basketball court.

Her-Oes overall is an engaging and fast-paced mini-series that uses its limited space wisely to present a clear and enjoyable story that is not trapped by simple high school situations. Writer Grace Randolph delivers by allowing readers to connect and care about characters they may not be familiar with, as Janet uncovers the larger Marvel Universe hidden around her. The moral of discovering and fully using one’s potential to accomplish great things is presented in a subtle way that does not derail the plot.

One minor quibble I have with Her-Oes is that Valkyrie did not show up despite being on the cover of the first issue. One hopes she will appear in the future, for this all-ages title is rich with the story potential to make a sequel mini-series desirable. The trade for Her-Oes will be released this November and will include a full color reprint (for the first time in six months) of Savage She-Hulk #1. Her-Oes is ideal for anyone looking for a well-rounded story in a self-contained and fun world that I hope we get to visit again soon.

Eugene Liptak is a librarian and author who is grateful to Martin Gray for the opportunity to write these guest reviews for his blog. Cheers Mart!
You're very welcome, thanks for a breath of fresh air!
SPECIAL GUEST REVIEW Marvel Her-oes #4