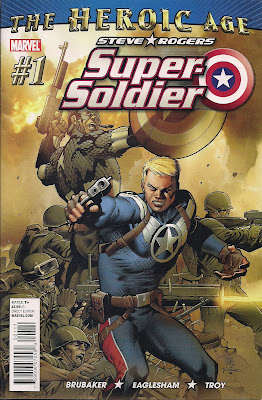 Hey, can Marvel call a book Super Soldier? I know Steve's been a super-soldier since the Forties, but surely DC have the use of 'super' copyrighted for cover usage? No. Oh well.

Super-Soldier it is, complete with the return of the dullest Captain America logo font ever, an ode to washing-up liquid if ever I saw one. Still, along with the shield he no longer uses, it's a nice wink to Steve's former status as the Living Legend of World War Two. According to the title page of this debut issue he's now 'America's top law-enforcement officer and commander of the Mighty Avengers'. So does he sit behind a desk on a flying aircraft carrier, ordering Wolverine to bring him soda pop? Does he heck as like, he's straight into the made-up land of Madripoor (the country that's not Genosha ... beats me which is which) after a tip-off from Britain's own spymaster, Pete Wisdom, presumably on a jolly to the US from dear old Blighty. It seems the grandson of the man who invented the super-soldier serum may be up to no good. You might expect 'America's top etc' use his pull to set up a meeting with pharmaceuticals CEO Jacob Erskine to ask what's up? Nope, not when there's fun to be had sneaking into a hotel, crashing a party, looking suave in a tux and beating up hired help.

And there'll be no complaints from me. Heck, this is the one, true Captain America, of course he's not going to enter by the front door when he can have some fun playing superspy. This strip, with story by Ed Brubaker and art by Dale Eaglesham, is fun from beginning to end. There's no dwelling on Cap's ridiculous recent history, Brubaker introduces his characters, winds them up and lets them run free. There's an interesting mystery or two set up, and so long as the storyline doesn't go on too long (four issues is about my limit), I'm there.

I'm sorry Eaglesham's run on Fantastic Four has ended so soon, but having him here is some consolation - he captures a classically handsome, heroic Steve ... it's no wonder he's tossed any mask aside. And the fight scenes are full of pop, with Steve showing some sound moves. Mind, the artist's pre-serum Steve - along with his fellow super-soldier wannabes - are far too spindly, looking less like skinny guys than malnourished POWs

The But. This comic is $3.99 but instead of several extra pages, as DC gives us, we're stuck with a reprint of Cap's origin. It's Simon and Kirby goodness, right enough, but who hasn't seen this a dozen times? We're even reminded of the origin in the main story. If reprints are going to be a regular thing, it's trade-waiting for me.

The cover's a bit odd, with the Super Soldier costume scaley a la the Forties Captain America suit shown in sepia behind Carlos Pacheco and Tim Townsend's oddly top-heavy Steve. And the flashback-style colouring by Frank D'armata is drab. This is not a cover that stands up off the comic shop shelves and salutes.

All in all, though, a good start. I still don't know the in-story reason for Bucky remaining Cap and the real Cap becoming Nick Fury, but until everyone returns to their regular roles, this will do nicely.
Steve Rogers: Super Soldier #1 review