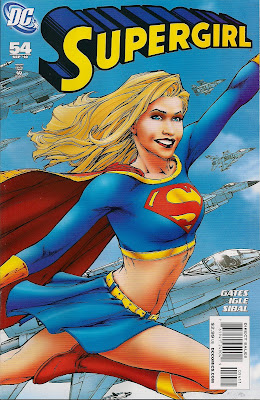 Dear Superman, while you're plodding through Philadelphia, spreading the gospel of Superdickery, your cousin is protecting Metropolis.

Mind, the threat this issue is firmly Kara-centric, being the Bizarro Supergirl. And Bizarrogirl makes history by being the first twisted duplicate that's genuinely scary. I noted in my review of last issue that she was freaky on the final page. Here she's chilling throughout, with penciller Jamal Igle and inker Jon Sibal making her look as fearsome as Sterling Gates' script demands. They're helped by new (guest?) colourist Jamie Grant, who brings that glowing All-Star Superman vibe to the party. And Jared K Fletcher letters with aplomb, his Kara narrative boxes being a nice addition to the look of the pages.

Plucking citizens off the streets, dumping them in tunnels and killing on a whim (but happily, off-panel), Bizarrogirl is just the thing - and I mean, 'thing' - to get Kara out of the funk she's fallen into following the destruction of New Krypton. 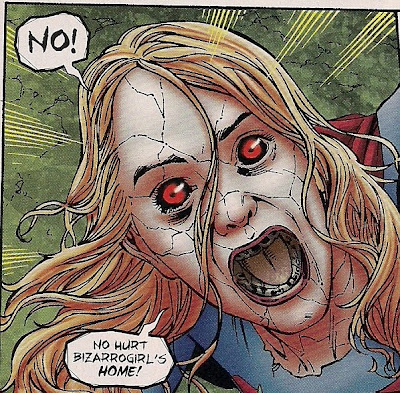 Well, you'd think. In fact, the Girl of Steel doesn't bother to find out what terrible thing is happening in the streets outside; that's how shaken she is by recent events. Thank God, then, for 'big sister' Lana Lang, who phones her to deliver a, shall we say, pep talk. It's a shame someone else hears it ...

... but that's a subplot to be followed up later, as is the identity of the man who lures a kid off the streets, claiming he's leading him to safety. That's a shame, as young Eli had only just had his life saved by this issue's standout character, the one, the only, the exceedingly ginger Jimmy Olsen. We're shown the characteristics that have won the cub reporter his first ongoing series in 30 years, starting soon in Action Comics (click to enlarge). 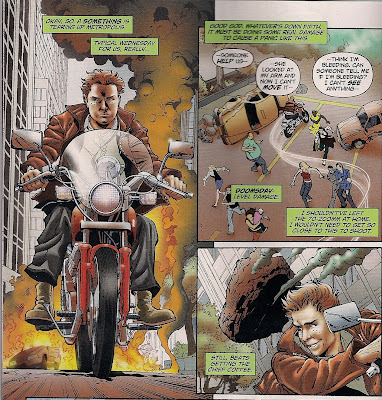 He's brave, resourceful and anything but dependent on Superman to save his bacon. Scornful of his own safety when there's a story to be had, he laughs at danger; I do hope he pals up with Kara while Kal is doing his Superest Hobo bit. She could use a larky friend like him to complement the motherly, magnificent Lana Lang.

When Kara finally gets it together, she's the consummate heroine, flying into the face of Bizarrogirl despite the fact this being could easily kill her.

I loved this issue. Loved it. Kara, Lana, Jimmy - all get great characterisation and there's even some classic Perry White for good measure ('Somebody call the Science Police! Olsen's been kidnapped again!'). The Daily Planet scene shows what a mistake the Superman books make when they jettison Clark's connections there in service of some high-concept, rambling, stunt story. No setting or cast in comic compares to the that offered by the newsroom. Characters come - there's a new chap, Norrie, this very issue - characters go, but the place always crackles with a dynamic mix of personalities.

Gates just gets better by the issue. He opens with a brilliant moment of misdirection and goes on to pack the comic with incident, including the debut of Supergirl's Closet of Solitude. Igle also improves constantly, here showing a real knack for conveying motion, whether it's super-people or flying cars. Gates and Igle work so well together that I'm amazed they've not yet been split up - could it be they'll be allowed a long run on a character they so obviously adore? I hope so, as this series is shaping up to be a classic of solid, smart superheroics.