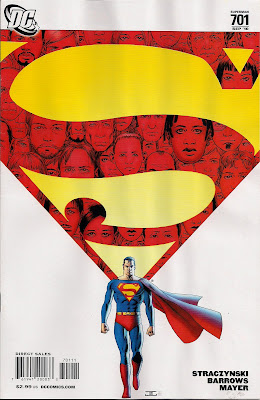 I'm down with that. For several years DC would devote a Christmas issue to Superman reading his fan mail and helping one or two people. For the rest of the calendar, he'd help all the people. The stories showed Superman hadn't lost touch with ordinary humans, it was simply that his amazing abilities demanded he look at the bigger picture.

So yes, I'm fine with the occasional issue of Superman dealing with smaller problems.

I'm not so sure I want a year of it, especially if it means more of the lectures we get in part one of 'Grounded' aka The Superest Hobo. Superman's ruminations on John Lennon and JFK, or Henry Thoreau and Gandhi, would have even Captain America reaching for the barf bag. The truth is, the guy who asks, 'shouldn't you be out saving the world or something?' has a point. Plenty of people can be mechanics, or doctors, or social workers. But there's only one Superman. There's nothing stopping him setting up a foundation, or youth clubs or whatever, to spread his inspirational message, but at base, he should be using his powers to help the biggest number of ordinary Joes he can.

What he shouldn't be doing is preaching to the ordinary guy, and making dismissive, facetious comments to reporters asking perfectly reasonable questions (click to enlarge).

I don't like that Superman goes to a diner without enough cash for a meal - he's not just got off the boat, he's not the Queen of England. The scene makes him look stupid.

Is it really a great idea to ask a neighbourhood kid to pass on a message from him to ticked-off drug pushers? I'm all for people talking responsibility for their localities, but the lad is, what, all of eight?

And is that a word balloon whose lettering has dropped off, or a wry comment? I know I'd be speechless.

I did smile at this line from writer J Michael Straczynski, telling us he's up for the challenge of entertaining sceptical readers. 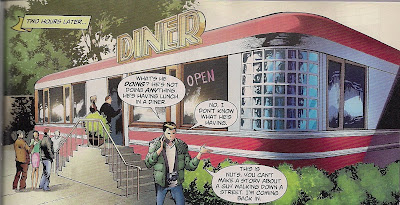 First, though, he has to convince us to stick around for the ride - sorry, walk. I'm giving this storyline three issues to grab me. So far, I'm not giddy at the prospect of a Superman who doesn't accept he's a hero with one breath, while telling people how to live their lives with the next. He may not be flying across the US, but his thoughts are still coming down from on high.

If ever a comic needed to end with a patented Geoff Johns 'coming up this year' spread, this is it. 'WHAT made the giant footprint in Boise, Indiana? WHO is kidnapping all the singing nuns in Nome, Alaska?' That sort of thing, because at the moment all I'm wondering is, 'WHO will Superman deliver a sermon to in Detroit, Michigan? and 'WHICH firehouse needs a lick of paint in Abilene, Texas?' I can imagine being more thrilled.

The artwork's sharp, with penciller Eddy Barrows and inker JP Mayer giving us a nice variety of character types and conjuring up a believable looking Philadelphia. Their Superman is dead on, but I'm already tired of seeing him striding down the street to, as he admits, no great purpose. I bet the artists would rather be drawing Kal-El bashing monsters.

John Cassaday provides a smart cover but does everyone have to look so miserable? Isn't Superman going to meet any happy folk? DC has a contest going in which North American readers can win a visit from Superman, but must they live in areas of gloom? And refreshing as the design is, there's a reason Superman's logo has survived for seven decades - I hope it's back next issue.

So, I'm open to being convinced, but if every issue is a variation on this opening chapter, for me, Superman's trip is going to run out of steam very quickly
Eddy Barrows J Michael Straczynski John Cassaday JP Mayer Superman Superman #701 review