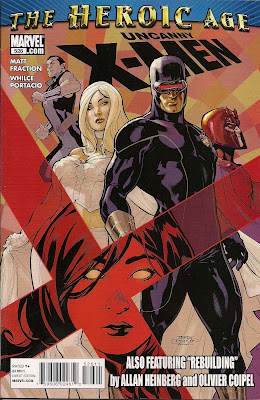 The X-Men are stalking five possible mutants, in the hope that they'll grow extra heads or develop acid sweat or somesuch. And Hope Summers, poster child for the 'One of us! One of us! Gooble gobble, gooble gobble!' brigade, is off looking into her own background.

Such are the two story strands this month. The most interesting, for my money, is the journey of Hope to Alaska, where she learns her surname, Spalding, and that she has a grandmother. Grandma tells her about her birth mother, a single woman named Louise who worked as a firefighter (and, of course, looked a little like Jean Grey, with her red hair and fiery nature: 'Turn bright red when she got mad, Lord ...' Steps back in amazement!). Hope doesn't reveal her relationship to the older woman, but finds some measure of peace in knowing that she still has some family.

On the way back to the laughingly named Utopia, Hope joins Angel and Iceman, who've been spying on a young woman who seems to be turning into Alopecia Lass. Slightly depressed, she jumps off a building, Hope leaps after her and spontaneously ignites the girl's mutant ability. The newcomer turns blue, metallic and flies. Obviously, she's going to be the best X-Man ever.

Underwhelming as the mutation of Laurie is, it gave me an old school kick to see the X-Men out in the field, ready to support a new mutant. I've not had that since Dazzler and Kitty Pryde showed up.

Kitty is also in this issue, as the subplot concerning her continued intangibility continues. It looks like she'll be fine, soon, as it's a psychosomatic thing. I expect Kitty's love for Colossus will pull her through. Literally.

Elsewhere, Emma Frost begins a flirt-off with Tony Stark. I have no idea where that one's going, apart from the bedroom.

Unimaginative mutations aside, Matt Fraction's script is fun, with lots of decent moments with the X-Men. My favourite shows that Angel doesn't always manage to fly sunny side-up (click to enlarge).
Whilce Portacio's pencils are inconsistent, with most pages looking just fine, but occasional very peculiar moments, as when Hope dives after poor old Laurie. Still, his faces are a lot more interesting than those of many artists, and there's no sign he's using models - there's life in the artwork. And I liked the thought that went into panels such as the one with the massive shadow of an X over a panicking Laurie. Now if only Portacio would remember that women's hairstyles have moved on since the Nineties. Ed Tadeo inks, Brian Reber colours and the overall effect is more good than bad.

The big selling point for me this month is the back-up strip, a prologue to Avengers: The Children's Crusade by Allan Heinberg and Olivier Coipel. Magneto is interested to learn that Young Avengers Wiccan and Speed may be his grandsons; Wolverine tells him to back off, while Cyclops is more sympathetic. It's a nifty character piece, with Logan, in particular, shining, as he eloquently lays out his position as regards Magneto's latest 'reformation'. The sombre art by Coipel, inker Mark Morales and colourist Justin Ponsor adds to the dramatic mood.

The cover by Terry and Rachel Dodson is Marvel's default 'heroes standing around hoping that a movie poster artist is passing' bit, but the X-insert adds some interest, and it's certainly a pretty piece of comic art. Even if it does include the idiot Sub-Mariner.
Uncanny X-Men #526 review