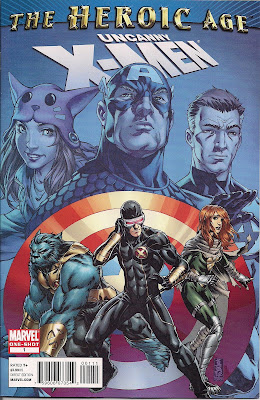 Just as the X-Men titles descend into the darkness of a vampire storyline, here's a special in which they step into the light. Three short tales are mixed and matched into a whole that marks the beginning of a new era for the team once dubbed Marvel's Merry Mutants. It's a long time since they've been merry, what with writer after writer obsessing on the 'feared and hated by a world they have sworn to protect' bit. I could never buy that so many people in the Marvel Universe gave a hoot whether a super-person got their powers due to birth, accident, technology or out of a Crackerjack box.

Things began to make more sense once the mutant births stepped up exponentially, but after the Scarlet Witch mouthed 'no more mutants' and proved shite at maths, the 198 or so left with powers really had no reason to be quite so hated and hunted. But they were, leading X-chief Cyclops to embrace the segregationist philosophies of Magneto and me to embrace other comics.

But now it seems that the mantra is 'no more moaning'. Molly from the Runaways comic tells the Beast to cheer up, Franklin Richards lets Hope know excitement lies ahead and Proper Captain America advises Cyclops to quit cowering in corners and stand up as a hero.

Amen. So it is that by issue's end there's the beginnings of optimism among the X-Men, as they're given the Presidential Medal of Freedom for their efforts over the years. And Hope goes off on a quest to learn who her parents are (I've not been following, but presumably she's had the obvious DNA comparisons with Scott Summers and Jean Gray?).

I can't say I give a fig about the 'mystery' of the latest ginger stray to hit the scene, but I'm chuffed to bits at the prospect of the X-Men being front and centre of the Marvel Universe again, meeting people other than mutants and mutant haters. Once the vampire stuff is over - well, as over as anything in the X-Men's world ever is - I'll check back to see what's going on.

Matt Fraction's script here is pretty nifty, with my favourite scene being the opening conversation between Beast and Cyclops, as the former tells the latter he's lost it. I suspect this has already appeared in some other book, but it bears repeating. I also revelled in Franklin Richards being presented as something other than the doofus to sister Valeria's wunderkind. He's shown as the smart, wise kid the first family of the Marvel universe's first child should be. And Molly ... well, she's annoying a lot of the time, but Fraction captures her frustration as Hank McCoy stomps on her optimism, and it's good to see her turn him around.

Again, not having followed recent books, I don't know much about Hope ('mysterious girl who hangs out with Cable' was never the pitch to grab me) but I expect Fraction's portrayal is accurate. She seems to be your average cypher, not so much a character as a plot point.

But what is this one-off special's problem with dinosaurs? Fraction has Scott de-stressing in the Savage Land by blowing holes through them, and Beast telling Molly it doesn't matter that they're extinct (well, apart from in the Savage Land ... oops) as they were 'dumb'. Doesn't everybody love a big lizard?

The artwork is fine throughout - Jamie McKelvie handles Hope and Whilce Portacio returns to the X-Men for the Cyclops pages, inked by Ed Tadeo. Steve Sanders and Jaime Mendoza draw the Beast scenes, and go a little overboard on his snout, but other than that they do OK. Unless it was entirely down to Fraction's art directions, Portacio's handling of that Cyclops/Beast exchange shows a thoughtful artist at work. At the very least, he does a great job bringing the words to life.

Mark Brooks supplies a good-looking cover, with a clever touch being light shining off Captain America's shield on to the usually moody mutants.

I can't imagine there's a plot point in here that won't be referenced in the ongoing series, making this inessential, but as a taster of - hopefully - what's to come, this works. Especially if you hate dinosaurs.
Uncanny X-Men: The Heroic Age #1 review