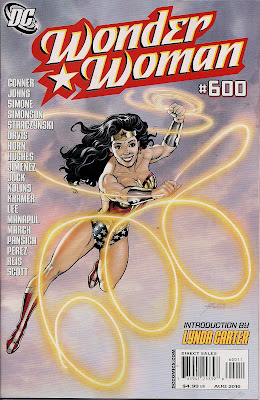 Wonder Woman gets a #600th issue and George Perez marks the big number rather cleverly on his marvellously cheery cover. It's appropriate the book's former writer artist has the cover assignment here, as this issue marks the end of the era he kicked off in 1987 and the beginning of a new one.

Perez is inside the issue too, drawing a story by most recent writer Gail Simone that has Diana leading a squadron of DCU ladies against fembot sirens, before attending the graduation of Vanessa Kapatelis. Given that Nessie and mother Julia were the most important supporting players in the Perez run, it's heartwarming to see them both here and happy for the first time in years. Yes, Vanessa is over her evil Silver Swan thang (teenage girls and their phases, eh?).

The action sequence is a cool way to show Diana's natural leadership and, whisper it, majesty. She has no airs and graces, but her peers treat her as their queen. Even the surly solo artist Ravager, asked how come she showed up for the fight, admits: 'She asked. I came.' Simone's script is a fine coda to her own run, a nice callback to Perez's, and a sweet 'see ya' to readers - the story's entitled 'Valedictorian' which, we're reminded, means 'farewell'.

There's a lovely surprise as Amanda Conner draws and writes a team-up between Diana and Power Girl, apparently set just before Power Girl #1. Who knew that after she closed her 12-issue run on the latter's book last month, she'd be back with Peege so soon.

But she doesn't favour Karen; both heroines are on great form, and it's Diana who teaches her pal something in a rare usage of her unity with beasts power. Whether you're a fan of Diana, Karen, manga tentacles, cats or all of the above, you'll like 'Fuzzy logic'. Even more so if you're not too politically correct to laugh at daft old Egg Fu.

There follows another team-up (checks cover - is this actually the 'Sensation-Comics-as-team-up-book' revival which fans have requested for years?) as Superman joins Diana to take on pre-Crisis villain Nikos Aegus. The sexist sod throws lighting bolts and 'tosser' is probably the best way to describe him. Nevertheless, 'Firepower' is a fun few pages by Louise Simonson, Eduardo Pansica and Bob Wiacek.

Scattered throughout the issue are some amazing pin-ups of Wonder Woman, all showing Diana's power and grace. It's a tough call to single any out, but the double-pager by Phil Jimenez (another former WW writer-artist, of course) is a fantastic tribute to the last quarter of a century. It's just a shame it's not in the centre of the book, I might have bought a second copy to actually - gasp - pin it up. Also worthy of mention is Guillem March's shot of Diana playing bullets and bracelets while apparently having a pee. Points for originality, there.

Oh, I'm so coarse. Back to the ever-graceful Diana, whose next strip in this bumper book is awfully perplexing. Written by Geoff Johns and drawn by Scott Kolins, it has the Amazing Amazon chasing a younger version of herself. The Wonder Girl asks: 'Don't you wonder what's beyond the next horizon?', a mysterious voice tells us, 'Diana is far too undervalued by this world. This must change. Let the Odyssey of Wonder Woman begin' and our heroine leaps into the light.

It's a little heavy handed as DC mission statements go, but nicely drawn, and serves as a transition sequence between the earlier stories and the main event of this issue, the debut of Wonder Woman as reinvented by J Michael Straczynski and Don Kramer. A Diana with little memory of her past, clad in that new costume, beats baddies in an ally, gives her curtain-clad protectors attitude and doesn't care that she has no gum for the sassy teen Oracle. She's a cold fish this Diana, and no mistake! Despite the lack of chewey, Diana gets a bit of information about her past. Well I never, it's all a lie! The final image of Diana standing amid the wreckage of Paradise Island should ring a few bells with her - she's done it enough times previously.

If scripts could talk, this one would say, 'I'm a TV treatment', as it takes the bare bones of Wonder Woman's story and leaves out the spark. Diana could be any martial artist here, as she's yet to get her full power set. She has no emotional connection to Themiscyra, having been smuggled away at the age of three when her mother was murdered and home destroyed. Whereas previously Diana fled a love-filled Paradise Island in search of adventure and romance, this version looks set to spurn a cold environment - her bald Amazon guardians line up in sewers - in search of a past that could lead to a better future. Wonder Woman may have lost the flag-waving uniform, but she's more American than ever, due to her US upbringing, so there goes the stranger in a strange land angle.

I can't know where this is all going. At a guess, I'd say we're getting a year-long quest which will end with Paradise Island and Diana's true history restored and, unless the new costume gets a positive response that's been absent in the two days since its reveal, a return to the classic look.

I'm fascinated to see what happens. In ten pages JMS has presented a Diana so grounded as to be anything but a Wonder Woman. I'm assuming it's the old 'strip them down to build them up/it's always darkest ...' bit yet again. I do hope so, because if Wonder Woman is going to remain a joyless soul with little connection to her heritage, well, what's the point? A Wonder-free Wonder Woman isn't going to inspire anyone.

I'm more optimistic than not, given the delightful way JMS wrote Wondy recently in The Brave and the Bold, a comic DC cites this very week as one worth grabbing.

And while I argued in a column at Comic Book Resources in January (Yes I did) for the debut of a new costume in #600 as a fun publicity stunt, Jim Lee's design is a bit bland. Wonder Woman should stop you in her tracks - a woman so confident, so comfortable in her skin that she can make the most outlandish outfit work. It's all very well DC wanting an outfit that could work well in the oft-mooted Wonder Woman movie, but let's not put the cart before the horse - don't we deserve something that looks great on the comics page now? The adaptations can come in the adaptation.

In an essay at the back of this issue JMS says the thinking behind the redesign included: 'Let's give her clothes that she can fight in, that add to her presence and her strength and her power.' Could it be that they're still working on such a design? A key phrase for this look is 'street-wise'. As in streetwalker? Cheap shot, sorry(-ish). I don't want Diana to look like just another urban vigilante, I want her to look like she's from another world. The joy of JMS's Diana in Brave and Bold #33 was that she was a hugely impressive figure able to deal with regular folk on the same level.

Mind, thank God that exploitative old costume has gone the way of all flesh. 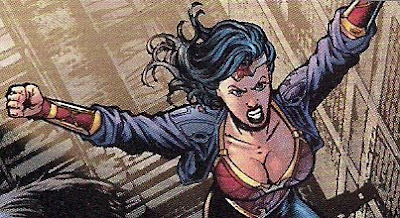 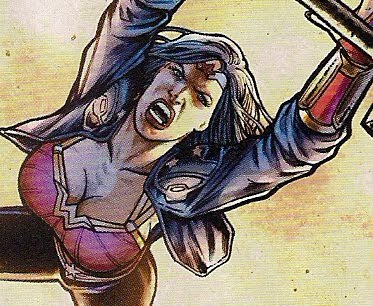 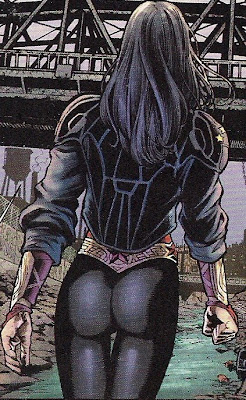 The poster gallery this issue demonstrate that with the right artists, Diana looks like the first lady of comics she is.

So let's hope that Wonder Woman returns and Mundane Maiden is put away with Diana's many other temporary makeovers. Let this stunt run its course and then JMS and Don Kramer - whose artwork with inker Michael Babinski is pretty impressive here - can get on with showing us a Diana who is unique. Bring back the iconography and if they really want to recapture Diana's Golden Age impact, embrace the wacky. That doesn't necessarily mean a return to ideas of bondage and loving submission, but a weird sensibility would certainly be welcome. Alan Moore managed it with Wonder Woman knock-off Promethea, it's time for the original to show how it's done. The publicity this week has done its job - Wonder Woman was ridiculously high in the iFanboy pull lists, for example - but if readers are to be kept, Diana can't be reduced to just a costume. Especially one so daft even Sarah Jessica Parker wouldn't wear it.

Which reminds me, 10,000 demerits for the hideous title 'Couture shock'. I love puns but it was very wrong for the story.

Meanwhile, thanks DC, for a special issue that actually felt special. What's in #700 then?
Wonder Woman #600 review