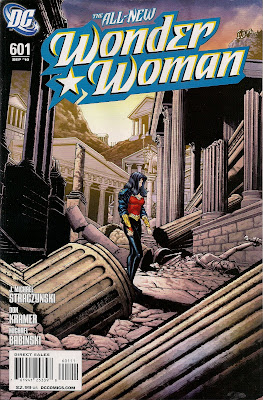 If there were any doubt that this is a darker DC Universe, it's the calibre of ice cream men. Seriously? A kid would buy from this guy? (click to enlarge) 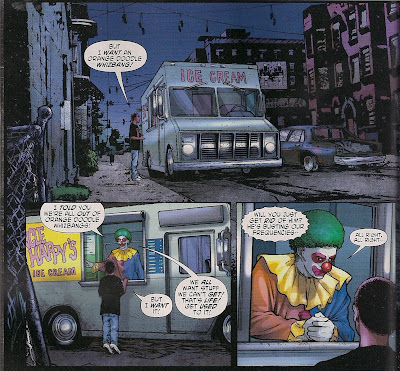 At night, in a run-down street? And pester him for a product he's already told you he hasn't got?

Somehow, this dope survives the issue. As does Diana, after the gum-obsessed Oracle shows her that mother Hippolyte apparently killed herself rather than be murdered by the soldiers who razed Paradise Island. She also learns that Uncle Happy is a surveillance man for the island invaders, who want to track down all the women who escaped, and kill them. Clambering on to the ice cream van, Diana reaches the mystery men's base, hears of their intent to slaughter a pocket of survivors in Turkey, and hitches a ride on their plane. But is she too late?

Ride is the word for this first full issue by writer J Michael Straczynski, penciller Don Kramer and inker Michael Babinski. We're taken from the sewers and streets of New York to the past of Paradise Island and the present of Turkey. The emotional journey of Diana - not yet a Wonder Woman - is conveyed almost entirely through the artwork; there's neither internal monologue nor thought balloons. But Kramer proves up to the task of showing Diana's sorrow, confusion and determination to set her screwed-with past right. And Straczynski's script helps us infer what this younger version of the heroine is thinking and feeling. Normally, I like to be privy to our heroine's private thoughts, but a certain mystery suits the current storyline, with Diana slowly learning about her true past.

I rather enjoyed the siege of Paradise Island, with the Amazons taking the righteous sword to their attackers. It showed what a fierce lot they truly are, inspired by a classic bit of battlefield oratory from Hippolyte. I also liked that the Oracle showed a nice level of self-awareness without getting too cutesy about it, and that Diana managed to crack a smile. Plus, there's no fannying about with several issues of set-up showing Diana's second life, followed be her slowly realising something is awry - Straczynski is straight in there with Diana dreaming about the traditionally costumed version of herself, recalling that her protectors once told her she would fly.

A quibble: in the flashback scene, the leader of the island wreckers is shown only in shadow. We see a bald head and a naked body. Yet Diana doesn't ask her Oracle pal if she knows who the man is. Which could mean the shadow is for the reader's 'benefit' only, and Diana recognises the leader. Please don't let it be Lex Luthor, as Diana can do better than borrowed villains.

Kramer and Babinski's artwork is strong throughout: the battle scenes burn with fury; the modern urban landscape looks as threatening as the Amazon conflict; Hippolyte is stately queen and wildcat by turns; Diana leaps into action without fear or hesitation. It's all made more intense by the rich colours of Alex Sinclair. Even the dull temporary costume looks good at times (that is, when we're not having Amazonian arse thrust at us). I hope this team sticks around for the whole this storyline.

After this issue, I'm pretty sure I will. Having accepted that we'll be getting a different Diana for at least a year, it's apparent to me that she's not so different. This Diana is smart, brave, curious and compassionate. I can't see it being long before she steps forth as Wonder Woman.