So Wonder Woman has a new costume. Been there, done that, as this latest coffee table book dedicated to the Amazing Amazon proves. Robert Greenberger's Wonder Woman: Amazon. Hero. Icon, among other things, shows how the costume has changed since its 1941 debut. Sometimes it's even been tossed out altogether, during the Mod period, for one.

And it's always returned, along with many of the other elements focused on here, such as Diana's weapons, supporting cast and villains. Over 200 pages we see how Wonder Woman's adventures have been presented over the decades and get an inkling as to why the character has endured. The foundations of Diana, as laid down by creators William Moulton Marston and Harry G Peter, are a big part of that. The bondage days are long gone, but something seems to have been imprinted on the cultural psyche. And with panels such as this, from Wonder Woman #6, it's no wonder. 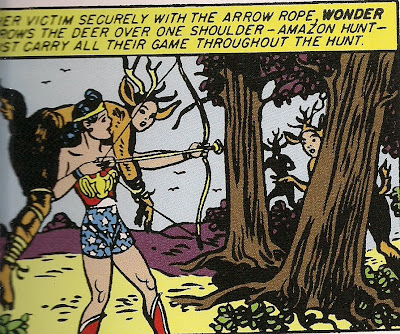 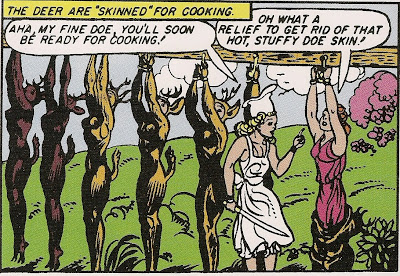 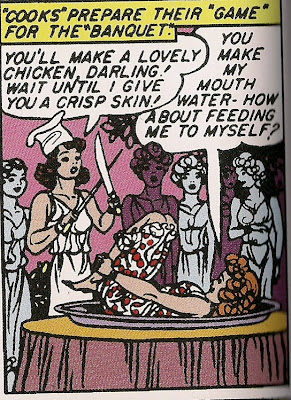 I used the term 'coffee table book' earlier, and that's fair, and certainly not a negative - this is more a book to browse for the gorgeous images than to turn to for in-depth analysis. There are plenty of other books, articles and websites for that sort of thing. What this volume does brilliantly is provide a pacey run-through of Diana's doings and the real-world people who facilitated same, and showcase the work of some terrific writers and artists.

The images benefit from being reproduced bigger than the comics, on glossy stock. Well, usually - one or two excerpts don't look so great at the larger size ... but they did their job in the comics, telling a story to readers who weren't always as fussy as today's.

Greenberger's tone is bright and breezy, making this a great read - I gobbled it up in a single sitting, but I'll be going back to it again and again. Given the size of this work, it's amazing that only a single statement annoyed me. On the subject of the Sixties killing off of Steve Trevor by writer Denny O'Neil, Greenberger writes: 'It was a move O'Neil made because he couldn't figure out what to do with what was essentially a dull character.'

That's a surprise, coming from a man who was a rather fine DC editor - while I don't entirely agree that there are no bad characters (hello Magog, Deathstroke, Gangbuster ..), Steve Trevor was a war hero who captured the heart of the world's most amazing woman. If he was dull - and, to be honest, a total tool in the Sixties - it was because longtime writer/editor Bob Kanigher wrongly felt Wonder Woman could only look good if Steve looked bad.

Rant over. Actually, it's nice when a book gets opinionated, I'd have welcomed a few more contentious lines (even though this particular one seems more a case of Greenberger parroting O'Neill when he might have been interrogating his statement).

But let's not worry about what this book isn't. What Wonder Woman: Amazon. Hero. Icon is, is a primer for new fans and a present for old. And the visual feast shows that when it came to coming up with a standout look to grab 21st-century attention, DC has missed a trick. Just look at this delight from the Golden Age: 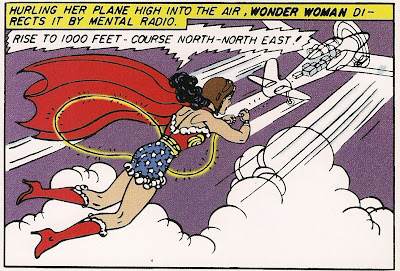