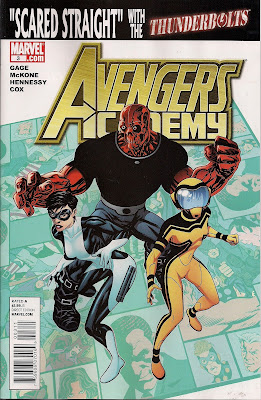 The first six issues of this series are being narrated by the new characters who make up the student body. It's a smart way to give us an insight into the newcomers, and change the perspective on the Avengers' aim to ensure these troubled teens don't turn to crime.

In the spotlight this month is Hazmat, the radioactive girl so deadly she's condemned to life in a containment suit. And that's no life at all. Given what happened when her powers activated for the first time, it's impressive she's not spending her days screaming in a padded cell, but here she is at Infinite Avengers Mansion, ready to take her lessons.

Like fellow pupil Veil, she was tortured by Green Goblin Norman Osborn as he sought ways to exploit her, dialing her tendency to emit poisons up to terrifying levels. So it's not surprising that when the Academy instructors, led by the Wasp, Hank Pym, take the kids to supervillain prison The Raft, that slipping away and finding Osborn is high on her agenda. Will she, accompanied by Veil and metal man Mettle, be able to scare him into telling her something that may help her condition?

The arc title is 'Scared straight', the students figuring that's what's behind the Avengers' oddball field trip, and it's a reasonable assumption. It seems a little early for such drastic measures, letting the worst of the Marvel Universe leer and threaten the Academians, but Hank doesn't always make the best decision. For example, after starting her super-career as a criminal, pretending to reform, and betraying pretty much everyone she's ever met, is Moonstone really a sensible person to have assess the teens' psyches?

The notion makes for a fun page, but undermines the idea that Hank and co - who have all come through their own hells over the years - are suitable mentors. Hank doesn't even know that one of the instructors is self-harming (a turn of events that had me groaning ... I really hoped this character was moving forward after years of abuse by writers).

And it's not just Hank whose idea of a suitable curriculum is dubious. Tigra brings in old pal Valkyrie - well, whichever version of the character is active these days - to take the girls in Superhuman Gender Roles. Taking a logical look at how a Norse warrior woman would think, writer Christos Gage provides a memorable scene.

Also guesting is Iron Fist, leading the course on Intermediate Hand-to-Hand Combat. He makes what seems a very fair point about the talents of copycat fighter Finesse, which is immediately - and fairly - undermined by young Stryker.

The Raft visit is to be shown from the point of view of the supervillains in the Thunderbolts, though this week's issue doesn't touch on it much. In this book, we have Gage mixing personalities and ideas to present a different perspective on the metahuman teen experience to that shown by all the X-teen books that came before.

And Mike McKone captures the emotions of the characters well with his pleasingly precise pencils. There's not a lot of traditional action scenes, but the book still has a big, bombastic feel. Andrew Hennessy and Jeromy Cox ink and colour respectively, making this one very good looking comic.