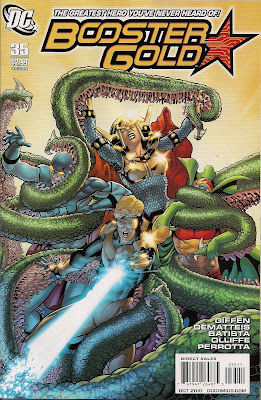 Veteran comic book writers come in two varieties. The ones who can't keep up with the next generation, and those who wipe the floor with them. Keith Giffen and JM DeMatteis are the latter.
In Booster Gold #35 they give us a noble hero, dastardly villain, guest stars, deadly weapon, plot, sub-plot, humour, characterisation, sound, Female Fury, significant nothings ... it's a standard 22pp superhero comic but took me half an hour to read, and while length of time spent isn't a fantastic criteria for what makes a good superhero comic, length of time spent grinning, marvelling and just generally enjoying moment after surprising moment is.

The story continues from last month, but you could jump right in via the recap. Booster has hopped into the past to find evidence at the Justice League International embassy to prove Max Lord exists, but gotten waylaid ... by several light years. He's gone with Blue Beetle, Mr Miracle and Big Barda to a world where the villainous Hieronymous the Underachiever has gotten hold of the Cliffs Notes version of the Book of Destiny. Even this idiot, whose name perfectly describes him, could do a lot of damage with such a powerful mystic oojamaflip.
Can the heroes fight their way to him? Will regal enchantress Artemis resist Hieronymous's demands to help him? How will the scarier-than-it-sounds Planet Pounder be stopped? Dare I ask more questions than the rhetorically sound three?
Oops, just did.
Can Beetle get back on track and find something to help the present-day Justice League save the world? Will Big Barda resist killing Beetle and Booster? What's the surprise from Booster's ward, Rani?
I know some readers have baulked at the return of bwah-ha-ha humour to Booster's life, but as part of a rich meal, I'm fine with it. This diversion to Booster's glory days comes in the context of a devastating threat to his current life, and Giffen and DeMatteis don't let us forget that. This storyline is a gratifying balance between the straightforward superheroics of this book's previous creative teams, and the super-serious world of Brightest Day tie-ins. There's fun, but it's part of a drama that comes with a built-in poignancy, as Booster has the time of his life with a friend who has since met his death.
Want more? There's the return of the Darkstars to a DC book, a scene showcasing the closeness of Booster and Beetle, and a cameo by Ralph Kramden from The Honeymooners, as a wiseass extraterrestrial. There's a link to Giffen's work on the Legion of Super-Heroes with Artemis anticipating the look of super-sorceress the White Witch.
Oh, and smutty banter. I do like a bit of decent filth. 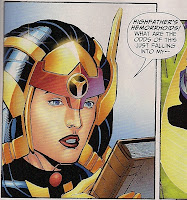 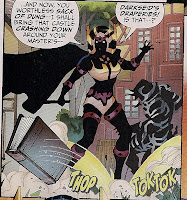 Along the way, we're reminded what a loss Jack Kirby's New Gods are to the DC Universe. Mr Miracle is Booster's secret weapon for saving the day, while Big Barda's battle tactics are valuable - but her oaths are priceless (click to enlarge). The sooner the classic versions return to continuity, the better.

The story ends on a cliffhanger, with next issue's title - 'Ted Kord, Chipmunk' - promising a rather original tale/tail.

Penciller Chris Batista and inker Rich Perrotta don't illustrate the entire issue, which may be something to do with the amount of work they put into the 18pp they do manage. I can't recall the last time I saw so many backgrounds, and detailed, interesting ones at that. Castles, characters, cosmic stuff - every page is packed to the gills with eye candy. The foregrounds are rather great too, with nicely rendered figures acting their way through evocative emotions and frantic fisticuffs. Even dustpan robot Skeets looks good, and moves convincingly.

Pat Olliffe steps in to illustrate the last few pages and it's difficult to see the join. He even changes his style for the coda, when it seems a spot of Giffen homage was required.

Kudos, too, to the Hi-Fi person, who obviously relished the chance an alien world provides to go bright with the colour palette, and letterer Sal Cipriano for an awful lot of highly charged sound effects.

Completing the artistic package is Kevin Maguire, whose cover shot is poster worthy.

The tagline for Booster Gold is 'the greatest hero you never heard of''. I suggest it's also the best superhero comic most fans are ignoring.