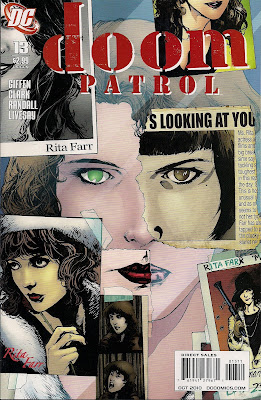 One of writer Keith Giffen's aims with this book has been to give the readers something new every month - a character, a concept, a fresh take on the DC Universe ... last issue he outdid himself with the revelation of Elasti-Woman's true nature. She's sentient Silly Putty.

I never saw that one coming. This month we learn how that came to be, as Giffen reconciles the appearances of Rita Farr in the Doom Patrol's various incarnations without having to retcon anything. The story makes perfect sense, but more, it makes for a tremendously entertaining issue of one of the most underrated superhero comics out there. Horror, humour, honour, hubris - this one, as they used to say, has it all.

The facts of Rita's second life are upsetting, shocking, such as having to will herself into shape every morning. But in presenting them, Giffen gives us the best look at Rita, inside and out, I've seen. He also shines light on team-mates Robotman and Negative Man. Also playing important parts this issue are the ever-manipulative Chief and Rita's ex-husband, psychic stalker Steve Dayton. There's even room for the little-seen Bumblebee to show there's more to her these days than self-pity as she acts as Rita's listening ear and finds herself starting to move forward with her own life.

The cover, by illustrator Matthew Clark and colourist Guy Major, is a beautiful, cleverly composed summation of Rita's plight. The interior art is equally commendable, with Ron Randall joining Clark on pencils, John Livesay inking sharply, Major colouring and Pat Brosseau lettering. Whether we're in the past or present, watching something happen or having it related via diaries, the storytelling is crystal clear and attractive.

There's no real fighting in 'I'm still Rita' but emotional punches aplenty, and it's fair to say that a situation which could have merited a 22pp wallow sees Rita emerge a bigger hero than ever.