Dracula: The Company of Monsters #1 review 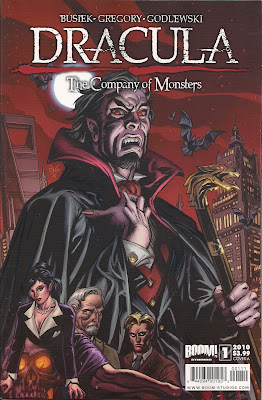 Even if I wasn't a sucker for a Dracula book, the ever-entertaining Kurt Busiek's name alone would get me to try this first issue. Busiek has provided the story, with the script coming from novelist Daryl Gregory. This initial chapter alternates the dark history of 15th-century European monarch Vlad Tepes with a day in the life of underachieving rich guy Evan Barrington-Cabot. And it's a confusing one for Evan, as his corporate shark uncle, Conrad, whisks him off on a mysterious trip - all Evan knows is that it's connected to the enigmatic scraps of Romanian verse he's been translating at his relative's behest. By story's end, things are looking very weird indeed.

While a traditional fang-filled Dracula is absent this issue, it makes narrative sense to fill in the background of his earlier incarnation as Tepes; certainly I learned a few snippets of information. Of course 'pale' is a synonym for 'big tall spiky pole thingie', but it's a new word on me.

Gregory's script immediately impresses with the terse narration of the first flashback leading to the money shot, which feels fresh due to the atmospheric build-up. And the current day scenes seem like they're happening now without the inclusion of faddish slang. Evan intrigues - everything in life's come easy to him, so will he be able to step up as his uncle leads him into a darker world than he imagined could exist? As for Conrad, so far he's your basic wealthy quester after knowledge ... I wonder if he'll merge with the spirit of Dracula, or maybe provide the blood to reinflate the vampire lord.

The artwork by Scott Godlewski serves the story well. It's strongest in the historical sequences, with pounding battle scenes and a nicely cinematic, shall we say, cutaway. The modern sections look duller, but there's less call for intensity - it'll be interesting to see how things develop once Dracula arrives and ups the ... no, I can't.

Colourist Stephen Downer does a fine job of laying down different palettes for Then and Now, while letterer Johnny Lowe effects a similar trick.

I've not seen the two alternate covers, but I'm happy with the one I've got, which features a moody montage by Dan Brereton, bloodily coloured by the splendidly named Alfred Rockefeller.

If there were any doubt I'll be back for issue #2 it was crushed by amusing lines in the indicia: 'Any similarity to actual persons, demons, anti-Christs, aliens, vampires, face-suckers or political figures, whether living, dead or undead, or to any actual supernatural events is coincidental and unintentional. So don't come whining to us.'

Nice one!
Dracula: The Company of Monsters #1 review