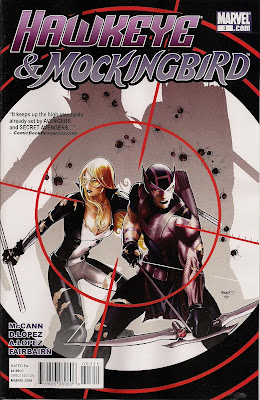 Just three issues in and this comic reads like it's been going for years. The set-up is solid, the situations are convincing, the characters compelling. I may not like that Mockingbird, Bobbi Morse, is so good at being the hard-faced espionage pro but she certainly gets the sparks flying, and the job done. I'm glad that Hawkeye, Clint Barton, the down-the-line hero of the partnership, is always on hand to remind her that being a human being isn't so bad.

And Bobbi certainly needs the reminder - this issue she treats a paramedic with huge disprespect, yelling abuse at him as he's trying to aid her injured mother. Sure, she's upset, but she's also been in the business long enough to separate the good guys from the bad, and she shouldn't be swearing at a fellow professional. Bad Bobbi.
(And do we to have superheroes letting free with the old &$^%, which appears twice this month? It just looks silly. Actually makes me long for 'the HELL?')

That's the titchy little moan regarding a rather excellent issue. It's 'Ghosts part 3' and Hawkeye, Mockingbird and long-lived mercenary colleague Dominic Fortune are tracking down Crossfire, who's responsible for the attack on Bobbi's mother. With Bobbi as strategist and the boys as ego-free partners, they make a first-rate stealth ops team, breaking into the HQ of Crossfire and fellow blackguard Phantom Rider, where they find themselves in big trouble. Writer Jim McCann is a dab hand at ratcheting up the tension, before finally hitting his characters with a no-win situation. And the relationship he writes for Clint and Bobbi is very believable - they sometimes fight, but boy, do they love one another.

One of the secrets Mockingbird has been keeping from Hawkeye tumbles out into the open and it'll be interesting to see them have a proper conversation about how she funds her WCA counter espionage network. Right now, Clint's too busy playing white hat to get into the rights and wrongs of Mockingbird reselling confiscated weapons of crime to 'friendly' nations.

There's a standout page here in which Hawkeye gives the reader an archery lesson, explaining how he focuses for the perfect shot; suddenly his having played zen ninja guy Ronin in the New Avengers makes sense. And not at all coincidentally, Clint gets his old Ronin swords out this issue. They prove effective, and make for a fun, surprisng moment, but as an old school Hawkeye fan I'll be happy if he sticks with the arrows.

The art by David and Alvaro Lopez is overall satisfactory, though a climactic scene in which two characters confront one another is undersold - a few speed/motion lines would give the panel the energy needed.

So any problems I have with this comic are easily sorted. Heck, even calling them 'problems' is overstating. McCann, Alvarez and co are producing a diverting book that's dense in the best possible sense. It's well worth a shot.
Hawkeye and Mockingbird #3 review