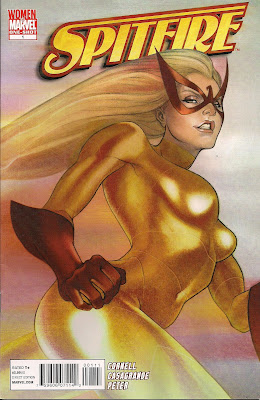 As a fellow English person, I've always liked Spitfire. Yes, she's posher than me, and a tad more patriotic, but I like to think we'd get on - we're both bright, brave (stop snickering) and British. She shone in the recent Captain Britain and MI-13 series, where she was 'just' one of the crowd. Here Lady Jacqueline Falsworth, vampire and speedster, is the star, lighting up New York with her wit and wisdom. She's a smiling superhero happy to have another shot at life and determined not to let the darkness within consume her.

Not that Spitfire is a solo-act in this delightful one-off - she's sharing the adventure with Blade the Vampire Slayer, and I don't mind at all. For these two are great together; she lightens him up, he makes it OK for her to brood just a teensy-weensy bit. The story has our vampiric heroes tracking down a traitor to the realm, stopping off en route at the least-threatening vamp club ever. The climax has Jacquie fighting solo, using her super-speed alongside her fangs, to take on the quisling Amelia Bertram-Hayes. More than Spitfire's fists, though, what really hurts Amelia are the home truths that she hears.

Cornell shows once more that no one in comics writes British characters so well. Every word of dialogue rings true, speaking to character and class. 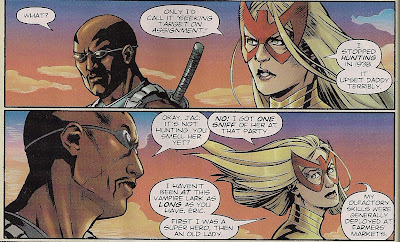 With this being a one-off, he doesn't bother with a madly complicated story, he just makes it a good one. There's a helpful recap of Jacquie's past and powers before the story begins, but anyone could enjoy this issue without being acquainted with Lady Falsworth and co. For example, do you need to know that Mys-Tech is a sinister organisation with roots in the comics produced by Marvel UK in the Nineties? Do you heck as like, it's obvious from the script that it's an eeeevil organisation.

Drawing the book is Elena Casagrande, and she does a nice job of keeping Spitfire, Blade and the rest of MI-13 on model, while adding a vitality all her own. I especially liked the depiction of Jacquie's super-speed, lovely sharp speedlines, spiffily coloured by Cris Peter. And I adore her character design for Amelia - Casagrande depicts her as a Dragon Lady/right old trollop .

The sterling cover is the work on one Jenny Frison, who sounds like she may be an MI-13 agent, actually.

With Paul Cornell having signed an exclusive with DC, this comic gets to be his Marvel swan song. I dare say it'll have many of us looking forward to the day he returns to the world of Spitfire and chums.
Spitfire #1 review Paul Cornell Elena Casagrande Cris Peter