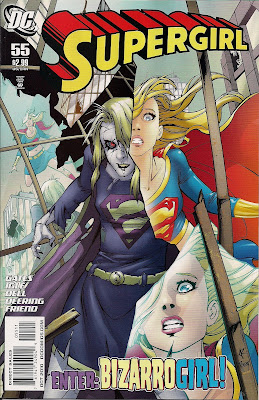 Amy Reeder debuts as cover penciller and provides a striking piece, inked by Richard Friend and coloured by Guy Major. The visualisation of Bizarrogirl as a bizarre reflection of Kara Zor-El is perfectly captured. It also serves to sell the essence of this issue - two beings who share so much, but can never understand one another.

This is the third issue in a row to feature the twisted version of Supergirl from the Bizarro World. But am I bored? Am I heck. Writer Sterling Gates keeps the twists and turns coming thick and fast (with far less cliched writing than I'm managing here) and Jamal Igle continues to be the best Supergirl penciller this book has had since it began five years ago.

The battle between Kara and, hmm, we can't call her Arak, that name's taken ... anyway, the tussle between the twin titans is ridiculously entertaining. One gets the upper hand, then the other, then the one, which is how it should be in two beings so different, yet so similar. Bizarrogirl's powers may be the opposite of Supergirl's, but she's every bit as determined to win, even if she does occasionally get distracted. 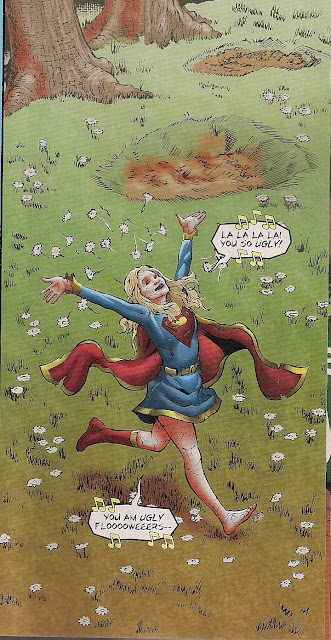 Oh Lord, the character is a delight. I'm not keen on her being a killer - and potential cannibal - but Bizarrogirl is massive fun in her unpredictability. She even comes up with a remarkably apt new name for the ever-tiresome Gangbuster.

As well as the present day tussle, this issue shows how Bizarrogirl came to be on Earth, with a flashback to a Bizarro World that's just the right mix of whimsy (the Fortress of Togetherness in the Anti-Arctic) and creepy (Bizarro Lois). Gates proves to be one of the few modern writers who gets the Bizarros, while Igle finds a seam of wildness in his pencil that's perfect for the unrestrained, lunatic emotions of the imperfect duplicates. Sepia shadings by either Jamie Grant or Jim Devlin, who share the colouring credit, also add to the unnerving air.

As well as two colourists, this issue features three inkers - John Dell, Marc Deering and Richard Friend - who all do a fine job of keeping Igle's art looking great. Favourite scenes include a stellar spread of Kara showing Bizarrogirl what she's made of, and panels depicting Dr Light II actually getting to be useful for once. Jared K Fletcher is sole letterer, producing a terrific skewed font for Bizarrogirl.

Gates surprises by having Kara do something I can't recall Superman ever managing, a Flash-family trick, and letting Jimmy Olsen do some actual reporting. There's a very nice scene, too, of Kara demonstrating true Superman Family concern for victims.

I'm getting a little tired of Cat Grant's anti-Supergirl obsession, but I suspect things are coming to a head soon, and she does get a subplot all her own. Plus, she says 'Ta ta!' in a very Bronze Age Lana Lang way, which made me smile.

And I don't know whether it was Gates, or Igle's, idea to have Supergirl punch Bizarrogirl right out of her boots, but it's a masterful moment. It's likely they came up with the idea together, given the creative synergy this pair have. I'm a tad sad at the prospect of Igle moving to Birds of Prey, as I could only see the team's greatness growing were they to stick together awhile longer. Still, nothing's been announced officially, and Igle really loves Kara, so who knows? 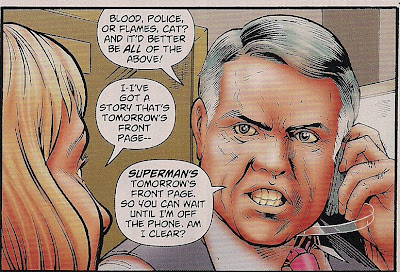 There's an awful lot going on this issue, and an awful lot to praise, but there's only one thing really occupying my mind - what the heck is up with Perry White's hair? Traditionally he has receding brown hair with grey sideburns, but it's been getting thicker and greyer of late ... is he wearing a wig? That's what Cat Grant should be investigating.
Supergirl #55 review