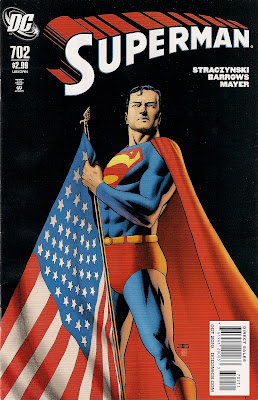 Right, I'm halfway through the second issue of Superman's walk across America. I just need to bang my head against the wall for one minute ...

OK. I'm back. And I've read the rest of the comic.

Dearie Lord, I don't like the guy starring in this run by J Michael Straczynski. 'Superman' reaches Detroit and says hello to a chap on a porch. Then he does the old 'let the loser beat me at something' it - in this case basketball - so his very dim pals respect him.

Then he happens to come across a bunch of extraterrestrial refugees living quietly in the suburbs, as you do. There's a fight involving a big warsuit and Superman being mighty arrogant. And then, after everyone decides to just have a discussion, Superman turns out to be a massive ass.

If the aliens go home to Natalla, they'll be killed. They're living quietly, using their own resources, and bothering no one. Superman's view?

'Could you possibly have picked a worse time to immigrate here illegally ...?' and 'The point is: what are you giving back to the community?' Despite Superman's super-hearing. the aliens' very fair point, that he's an illegal immigrant too, falls on deaf ears. He leaves them with the passive-aggressive threat that 'I still haven't decided what to do about you. This isn't over. I just need to think for a while.'

As it happens, Superman needs the aliens' help later in the issue, and the story ends with the strange visitors helping regenerate Detroit, and me feeling nauseous.

I really don't want to read about a pompous, judgmental, sanctimonious, empathy-free arsehole for 12 issues. I'd rather the book was turned over to the Natallans, they're at least amusing. Maybe they could start a new Justice League Detroit or something.
There are some moments I liked: a scene with kids reacting to Superman's fight with the warsuit, our hero remembering he has a wife ... but overall, this is heavy going. Even if I weren't British, I doubt I'd be able to stomach heavy-handed allegories and lectures about the state of the US. As it is, I'm this close to dropping the book.

The only thing that's going to get me to buy next issue is the promise of a Batman appearance. Interfering in another hero's life is the sort of thing Bruce Wayne made an art of in the years before his 'death', so I'm intrigued as to what has placeholder Dick Grayson following Superman; it's just not the fella's style.

John Cassaday's style, on the cover, posits Superman as a big-headed chap with a plastic, action figure quality. Inside, penciller Eddy Barrows' style continues to be pretty, as inked by JP Mayer and coloured by Rod Reis. The layouts do the job, the people look good, Superman is the handsome hero. When we get to the big fight scene, the pages come alive ... and this is from someone who generally prefers soap to operatics.

There is an oddness attached to the tussle. Superman tells the warsuit-wearing Natallan that it's not actually tough to hurt him, 'the hard part is surviving me'. I took that as hyperbolic battle talk, but by the end of the fight he's covered in scratches. I wouldn't have thought twice about that, usually - alien tech has hurt Supeman in the past. But coming after the speech about his vulnerability, I'm wondering if Straczynski's Superman has been weakened to Golden Age levels, with the yellow sun acting as a healing factor. Certainly, by issue's end the signs of a scrap have vanished.

Along with my interest in this storyline. I'm pretty sure I'll buy next issue - I'm a Superman diehard, it takes a lot for me to drop his books. And I did say I'd give it three months. But one more issue of Preacherman and I'm out.
Eddy Barrows J Michael Straczynski JP Mayer Rod Reis Superman Superman #702 review