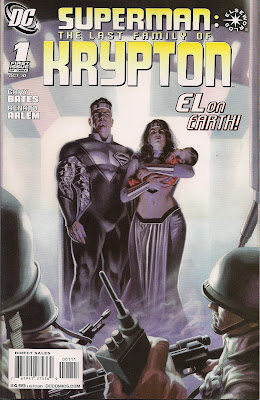 What if .... Jor-El and Lara escaped Krypton alongside their baby son? That's the premise of this three-issue miniseries, which isn't so much an Elseworlds as an Els' World. Settling on Earth, the senior Els sculpt roles for themselves as scientist and religious leader, while young Kal-El is farmed off - literally - to experience an Earth childhood.
That was the big surprise for me of this story; having escaped planetary doom, I thought the Els would hold onto one another for dear life. Thankfully, the renamed Clark's tenure with Martha and Jonathan Kent is somewhat of a boarding school deal, with him in contact with Jor-El and Lara, and back home for holidays. And Smallville gives him a place to meet young Lex Luthor, as intellectually sharp as ever, but emotionally, a dud - he could be the scientific son Jor-El wants, but on meeting Superdad, his arrogance alienates the alien. Lana Lang is around too, in a cute sequence echoing her old Insect Queen shtick.
Jonathan and Martha justify Lara's faith in them, giving Clark the warm upbringing not available at Jor-El's Metropolis sky palace, but I'm disappointed in Lara Lor-Van. As a person whose religion centres on unlocking individual potential, surely she'd try and answer her son's needs herself?
Other strands of the story include the Els' pet artificial intelligence, an expert in shrinking cities who answers to B (that doesn't bode well); and the changing relationship of Jor and Lara. By issue's end this last is resolved, after one of the hottest scenes in comics for awhile.
Is it too early to nominate this book for some kind of award? The story by Cary Bates shows the confidence of a man who spent a couple of decades in Superman's world. And yet, having been away from comics for almost as long, his script has the freshness of a talented newcomer.
And the illustrations of Renato Arlem are simply beautiful. Jor-El and Lara have never looked so gorgeous, they're fashionistas from another planet, while the Kents have the requisite down-to-earth strength (and boring dungarees). Battle scenes, cosmic moments, Metropolis cityscape, Smallville studies - they're all just perfect. And young Clark, Lana and Lex have personality etched into every expression. 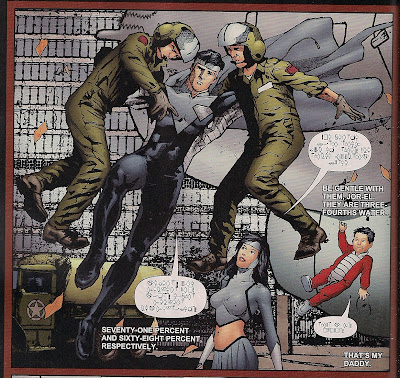 Bringing the extra touch that transforms great comic art into something to treasure is colour artist Allen Passalaqua. Every page is superbly finished in hues that never clash - never mind the hypnotic brilliance of outer space, I could stare for ages at the trees on the Kent farm, or the decor of the Kents' spare bedroom.
Every page of this 48pp story is a winner, visually and verbally. Superman: The Last Family of Krypton is shaping up to be one of the classic imaginary stories. If you've even a little fondness for the Superman legend, don't miss it.
Allen Passalaqua Renato Arlem Superman: The Last Family of Krypton #1 review Cary Bates