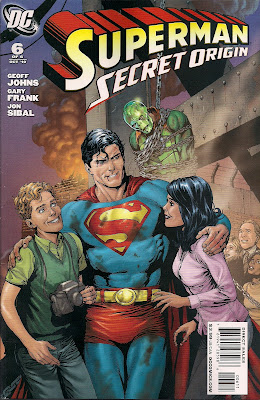 It's a weird time to be a Superman fan. No Superman strip in Action Comics, and a stranger in tights and cape in his eponymous book. Thank heaven, then, for the final issue of this comic, which I'd assumed came out months ago, and I'd missed.

Thank heaven, because it's the best single Superman story I've come across in ages. While I've read dozens of retellings of Superman's first appearances in Metropolis, writer Geoff Johns gives the story a fresh sheen, and adds pleasing shading. From Superman's battle against Metallo to the Daily Planet staff's reaction to General Sam Lane's bullying to the beginnings of the romance with Lois Lane and bromance with Jimmy Olsen, this is an enriching meal. It brought back the Superman I've grown up with, the guy who makes inspirational speechlets rather than patronising comments; the hero who looks out for everyone rather than follows his navel. The man of steel with a heart of gold.

Moments I've not seen previously include Superman's friends' reaction to the revelation that he's an extraterrestrial, and the people of Metropolis gradually recognising what a hero they have among them, rather than everyone immediately embracing the strange visitor. I loved the symbolism of Superman starting the long-rusty Planet globe spinning, cheered at Jimmy's resourcefulness and giggled at Luthor's Victor Frankenstein moment. I puzzled over Clark deliberately setting himself up as Superman's rival for Lois and grinned at Lois not believing Clark's useless act for a second.

I wondered why Luthor has the FIFA World Cup on his desk.

And still there's a standout sequence - the tender scene between Superman and Lois on the Planet roof, as they begin to fall in love; I've moaned loads of times about Johns' tendency to go for the jugular and rip it right out, so it's good to see he can still write the quieter - but far more meaningful - moments.

And the art team of penciller Gary Frank and inker Jon Sibal can certainly draw them. I swear I could hear the welling (not Tom) orchestral music as the future Mr and Mrs Superman share a soppy moment. The artists are proficient in  the louder corners of the script too, such as the splash panel of Superman showing the hostile US military where to stick their tank, and Metallo rushing forward menacingly despite the ludicrous thigh-high boots. What's more, the cover's a winner, summing up the issue nicely - there's no pretending Metallo may win this bout, just a dynamite commemoration of the friendship of three comics icons.

So thank you to everyone involved in this issue - I was a tad blase when the series began, but it's proven the perfect tonic for this longtime - ancient, actually - Superman booster.
Superman: Secret Origin #6 review