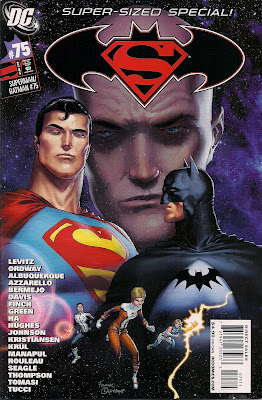 I've written a couple of posts in praise of the most recent storyline, with Lex Luthor taking advantage of a planet's suspicion of Superman to sow the seeds of a future revenge plot. Knowing the story would culminate in this extra-length 75th issue, with the Legion of Super-Heroes guest starring, I was rather excited.

I was expecting a story set in the 31st century, by which time the Planet Lexor would prove a massive threat to both Superman and co-Lex irritant Batman. A big team-up with our heroes and the future's super-teens taking on Lex and an entire planet.

Well, there's a 31st century sequence, and Lex does indeed seem to be worshipped by the planet, but we don't actually see the world. The only representative is a green clone of Lex Luthor who gives the Legion more trouble than he should. He then pops back to the 21st century and bashes Superman around because he's laced with Kryptonite. The Legion follow and enlist Batman's help to steal something from Lexcorp that may help them beat the clone ... while Batman babysits the poorly Superman in the Batcave.

The clone thinks it's killed Superman, so, er, goes back in time to kill Superman again/before, while he's Superboy. Work that one out. Anyway, the clone is defeated but the Legion fret that there are more out there. The end.

Writer Paul Levitz has proven again and again that he's one of the best plotters in comics, so I have no idea why this story is so disjointed. Why Superman and Batman would be relegated to cameo roles in their anniversary issue. Why Lex Luthor, the big villain of the arc, appears on a single page, and then he's not involved in the issue's events. Was the final part plotted to fill a double-sized issue, then squeezed down to 26pp when it was decided to include a series of two-page mini-tributes to the Superman-Batman team?

Whatever the case, it took the shine of what has been a terrific storyline.

It wasn't all bad, I liked seeing Jerry Ordway, coloured by Pete Pantazis, draw the Legion. The clone's prophecy was clever, and very nicely lettered by Steve Wands. Superman can hear the time barrier crack open. Batman's reactions to the Legion - and philosophy - made sense. Frank Quitely's cover is sharp, I've never seen Saturn Girl looking such a minx. There's a nice wink to the Smallville telly show. 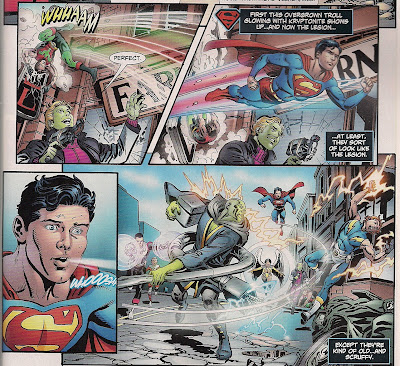 So the problem wasn't the detail, it was the story said detail was plugged into. If there's a Director's Cut out there somewhere - even if it's just a plot outline - I'd like to see it.

The comic soon put the smile back on my face with the two page back-ups. Let's have a speedy run-through.
There are more hits than misses in that lot, and every short has some merit. I hope DC gives us more experiments in anniversary issues - even made-up ones like a 75th issue!
Superman/Batman #75 review