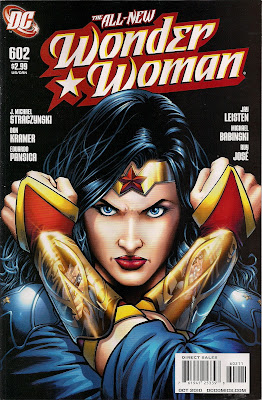 Lord, that's one scowly superheroine on Dan Kramer and Michael Babinski's cover. I really didn't feel like reading this book, it looks so bloomin' unfriendly. While I'm used to a determined, warrior Diana, this image shows a woman with no heart, no soul ... not someone I want to know.
Inside, Diana is more like the woman I know, at least for a while. She's the fierce defender of the dispossessed - in this case her rediscovered Amazon sisters - and a compassionate friend. Sadly, she's also ready to slaughter their oppressors without compunction.
And she's really badly dressed.
Just as we're getting used to the drab-at-best new look, Diana takes off her jacket and reveals the monstrosity below. It's done over the course of a few panels, so I suspect we're meant to gasp in awe. Awful, more like - I know some Wonder Woman fans have often suggested the traditional bustier gain a couple of straps, but this is ridiculous. It looks as Diana's lost a fight with those ballet shoes she wore in the 1950s.
By the end of the issue she's also gained a sword and shield, all the better to kill you with, my dear. Maybe we're meant to find her impressive and admirable on the final splash, as she poses with her new bits of battle gear, but I'm hoping not - certainly she's drawn with a sadness in her eyes. Or perhaps she's simply dead inside.
If I can cling onto the hope that Diana sees killing as a last resort, and this issue's slaughter is an aberration, I'll likely be back next month; if it seems we'll be getting deadly Diana until the new order emerges for this comic - when the current alternate reality arc wraps - I'll stay away. Better to rejoin Diana when her journey is complete than to get travel sick due to too many unpleasant twists and turns.
Things I liked this month were the depiction of Aphrodite as a mysterious being rather than the goddess next door, and Diana letting rip at her deity's typically useless and frustrating messages. Plus, the Amazons of Turkey come across as brave, good people, so I'm glad at least a few survived the battle against their unknown assailants this time out.
Two full issues into his run and I'm not sure what writer J Michael Straczynski is up to. I know he can present a modern, fun Wonder Woman - he did it in Brave and Bold - so I can't see why we must endure a quest to get her where he wants her. Just write her however, now. So far I'm blowing hot and cold on this often angry Diana, and there's a chill more often than not. Next issue could be the decider. 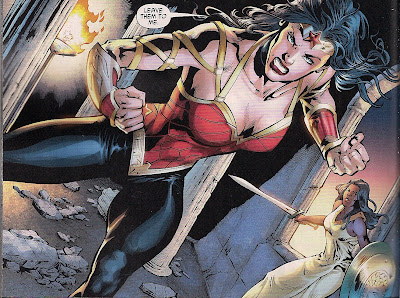 The artwork is less impressive this issue than previously, as penciller Don Kramer and inker Michael Babinski share the pages with penciller Eduardo Pansica and inkers Ruy Jose and Jay Leisten. It's still decent work, but inconsistent in texture. An early montage doesn't work, with multiple Dianas seeming rather aimless, and I'm already tired of the default battle pose of Diana pushing her chest out as she stretches her arms back. But everyone gets Diana's scowl off pat, that's the main thing. Grrrrrrr.
Alex Sinclair, as usual, turns in a fine colour job, with the eyes of characters standing out particularly - there's some very intelligent work here. And Travis Lanham letters with verve,
I wouldn't say this was a terrible issue of Wonder Woman. As far as Straczynski and Kramer's Wonder Woman goes, it may well be perfect - but the title character feels too distant from any 'My Diana' I've known for me to be comfortable with her. I hope that changes soon.