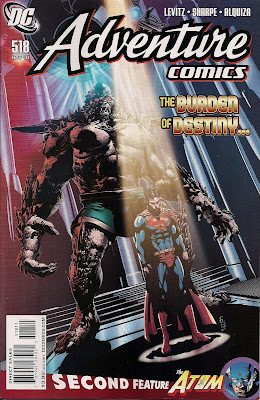 The Legion of Super-Heroes strip continues to fill in details around the team's earliest years. 'Whispers of Doom' is a prelude to 'The Stolen Super-Powers' from Adventure Comics #304, with odd details changed. So it is that we get an appearance by Dream Girl some time before she met the Legion, as she predicts that a Legion member will die and the High Seer of her home planet, Naltor, determines to get a warning message to the team. That would be the message #304 attributed to the Trylop Council of Mernl, who now enter the realm of Chronicler's Error (1963 storytellers Jerry Siegel and John Forte, bow your heavenly heads in shame!).

We also enjoy an almost-appearance by future Legionnaire Mon-El, trying to communicate from the Phantom Zone prior to his temporary escape in Adventure #300. Legion members are afraid of the vague voices they've been hearing around the Clubhouse, while Superboy manages to receive his words clearly without knowing it's his old pal. He flees the Superman Museum, being already rather creeped out at learning that one day, in his future, Doomsday will kill him.
Much of this issue is devoted to setting up the Silver Age Zaryan story which did indeed see a Legionnaire die, and it's these scenes which interested me least. It's basically just a lot of smashing of rocket ships by a superhero strike team. The Dream Girl sequence proves a lot more engaging, as it adds texture to her later, official debut, in Adventure #317. Now, reading that issue, we know (if we choose to accept this latest story as canon) that a message arising from her precog vision has already failed to save the life of one Legionnaire, so of course she'd take drastic action next time such a flash came.
The reported spooking of Invisible Kid by a 'ghost' is deliciously ironic considering that he eventually falls in love with a ghost girl (and, er, gets killed, meaning they can spend eternity together, which the spectral Myla thinks is just perfect. Cow).
And I enjoyed the idiocy of Zaryan's men in believing they could sneak up on a planet of prophets, and the fun of a fearlessly forward Phantom Girl.
The story continues next issue, and while I'm not finding these instalments among the most compelling of Legion tales, it's fascinating to see writer Paul Levitz endeavouring to add depth to Legion history without falling into some self-made swamp. Heaven knows what new readers are making of such rabid continuity porn, though.
I expect most are enjoying the sharp script on at least some level, while the art of Kevin Sharpe and Marlo Alquiza combines old-fashioned clarity with modern dynamism. Their Nural Nal is as gorgeous as a Dream Girl should be. There's a very nice colouring assignment by Blond, while Sal Cipriano does his usual bang-up lettering job.
This issue of Adventure also features another instalment of Jeff Lemire's Atom story, starring the character now listed in the credits as 'The Ray Palmer Atom'. This time out The Ray Palmer Atom fights some small men, who explode, and almost flirts with Oracle. It's a decent enough time passer (about two minutes, truth be told), with pleasant art by Mahmud Asrar and John Dell (including  a plug for Lemire's Sweet Tooth book),  but I'd rather the pages had gone to the Legion.
Adventure Comics #518 review Jeff Lemire John Dell Kevin Sharpe Legion of Super-Heroes Mahmud Asrar Marlo Alquiza Paul Levitz