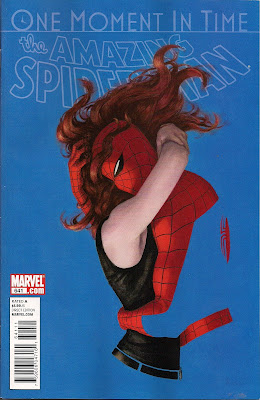 Delayed by a week, possibly due to its extra-length, here's the conclusion to the One Moment in Time storyline, in which we see what happened with the Peter Parker/Mary Jane Watson relationship in the changed continuity of the last couple of years.

... imagine that Confusion were a person and you drowned her in the soapiest of baths. That's this issue, which shows that Peter and MJ don't remember the demon Mephisto wiping out their marriage in exchange for saving the life of Aunt May in the One More Day arc. So far as they know, Peter resuscitated May with Spider-CPR, and Dr Strange, Mr Fantastic and Iron Man combined magic and science to wipe out the knowledge of Spidey's real identity from the memory of everyone but Peter and MJ. Then MJ walked out on Peter because she feared that one day someone would again discover that he's Spidey, and her family would be targeted by criminals, as happened in the flashback segments of this storyline. Back in the present, where Peter and MJ have been swapping miserable memories, MJ reiterates that she loves him, but Seeya!

That's Mary Jane Watson, the strong, sassy, confident, smart, brave young woman who's known Peter was Spidey since they were teenagers. The Chris Claremontwoman before Chris Claremont was out of short pants. Has MJ, perhaps, had her character weakened by Mephisto? I get the impression that we're meant to think not - she's made a rational decision.

Would MJ truly abandon her life with Peter rather than stay and fight? I don't believe that for a minute. The strength of her love for Peter is what got the deal with Mephisto inked in the first place.

Likewise, I don't believe this story, ultimately, was necessary. While it's had some good moments, which I've discussed in previous reviews, it's finally just a scab that should have remained unpicked. We now know what  Peter and MJ 'know', while we know that that's not what there was to know, except now it is. Until someone decides it isn't. Yeah, I'm confused.

One Moment in Time has sidelined the excellent Spidey stories that have come in the wake of the awkward, unloved One More Day in order to remind us of how annoying the thing was in the first place. Readers, mostly, had moved on. Writer Joe Quesada really should have done the same - an ill-conceived, poorly handled story had facilitated many good ones, so why remind us of the bad times?

This issue is 43 pages of laboured conversations about the rights and wrongs of memory wiping, the wisdom or not of Peter and MJ being together. Dr Strange, Reed Richards and Tony Stark witter on about which, if any of them, should remember Peter's secret; Peter talks to MJ about what a new status quo might mean; MJ tells Peter that she's just not strong enough to be with him and he should get on with his life, find someone new (let their loved ones be snuffed out). This last comes after they've professed their undying love ... whatever happened to true love conquers all? Too much talking, not enough feeling, that'd the problem here. The story turns on MJ failing to follow her heart, which betrays decades' worth of appearances.

I think I'll make like a Marvel Universe person and forget these issues ever happened. If I hang on to them, it'll be because of the lovely artwork of Paulo Rivera, which has grace and a deceptive simplicity. His characters are spot-on, from ever-fretting Peter to brainbox Reed to a dark-eyed Strange. Yup, the pages look great, it's just a shame they're so depressing - the same goes for Rivera's clever cover, which subtly hints that Peter and MJ are losing themselves, being swallowed up by the world. Quesada pencils a wodge of pages too, showing he's rather good at modelling with shadows. And furniture, I love his furniture.

Backing up the lead tale is another fun two-page mini-strip by Stan Lee and Marcos Martin. I'm looking forward to re-reading them in a batch when the daft time travel story concludes. It's fun. I feel like having some fun right now. Can anyone spare a hug?
Amazing Spider-Man #641 review Joe Quesada Marcos Martin Paulo Rivera Spider-Man Stan Lee