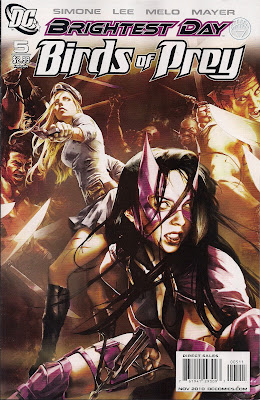 The four-parter that kicked off the Birds' latest series is over. But not really. The two-parter that begins here is called Aftershock, but it's a continuation of the initial story. White Canary is still around, Penguin is hanging on in there, the Savant and Creosote business isn't resolved ... and given that most superhero stories these days just go on, and on, why ever not?

I need to get over this, don't I? Probably it's something as simple as writer Gail Simone avoiding advertising stories are awfy long after the poor reception given an eight-parter in her often exemplary Wonder Woman last year.

All righty, moving on. Black Canary, aka Dinah Lance, buggers off to Bangkok with White Canary in handcuffs, though White Canary makes out that she could escape at any time. That's probably right - DC Comics martial artists can do anything. I expect White Canary is simply enjoying the bondage.

Dinah tells Birds leader Oracle, Barbara Gordon, that she may not be back, which could mean she really is considering murder. It more likely means she thinks she'll get killed. It definitely means Gail's getting a tad melodramatic. Dinah actually asking her friend and partner - who has access to all the world's knowledge, and superheroes, and a brilliant tactical mind - for help would end this storyline in two panels, and we can't have that. Black Canary has to accept the terms of the treacherous White Canary, play by the rules of her enemies - despite having already defeated White Canary.

Normally I'd assume Dinah has a plan, but her internal monologue tells us otherwise. We can take her actions at face value - she's wandering blindly into danger because she's too proud/idiotic to ask for aid.

Having been told not to by Dinah, surprise surprise, Birds chums Huntress and Lady Blackhawk follow and, surprise surprise, are intercepted by agents of Lady Shiva. Because in the DC Universe, martial artists know everything too. Seriously, in this comic Black Canary, possessor of a sonic scream that can smash brick walls, is wary of small, non-powered ladies. Hey, they're sneaky, and liable to put your eye out with their Plait of Pain, and it's soooo tough to remember you have super powers. Let's hope those magically strengthened Birds, Dove and Hawk, keep well away - Hawk has a healing factor, which means the judo gymnasts can hurt him again and again, and Dove can fly, so she's a heck of a target. Doomed.

In their own storyline (Dove and Hawk get their own storyline because despite being named after Birds, they've bugger all business being in this book) Brightest Day things are occurring. Were I still reading that series I might understand what they were. But I doubt it.

Elsewhere, Oracle, having persuaded criminals turned social studies project Creote and Savant not to murder her after they discovered the location of the Batcave, wants to give them jobs. She stops them from ever discovering her new headquarters, compromising the Birds' security, by taking them there. Meet Barbara Gordon, folks, one of the smartest people in the DC Universe. She failed to reform two bad guys, so she's going to try again.

I suggest she just lets them go to prison, while she trains as a probation officer, and mops up her bleeding heart.

Oh, Babs also nags Huntress into letting the Penguin go free - that's the Penguin who stabbed a Bird last month and has caused the team all kinds of trouble - because she has nothing on him. Think about that. The greatest computer genius in comics,  a woman who worked with the world's greatest detective for years, whose father is the police commissioner of Gotham, whose sometime boyfriend can sneak anywhere in pursuit of evidence, can't think of a crime for which the Penguin might be convicted.

In other news, Oracle's new HQ is a Seattle Tower-style building, because 'if you're going to hide in Gotham, it's best to hide in plain sight'. We're not told why this might be the case. In the Kord Tower the Birds will be so high up that by the time they get down to the street, the Threat of the Month will be over. I suppose Lady Blackhawk could fly them from the top of the tower to the scene of danger, but that's rather conspicuous for heroines who are hiding. Maybe they'll invest in a very long Batpole.

And anyway, the tower will be totalled as soon as the Batman Family has its annual cataclysmic crossover.

There are some sterling moments this issue: the Creote/Savante relationship; Huntress trying not to care about Dinah any more; then attempting to emulate her moves; the growing partnership between Huntress and Lady Blackhawk, which is beginning to rival the early friendship of Oracle and Dinah for believability and enjoyment; the subtle shadow of the Bat as Oracle wonders what Batman would do; everything that comes out of Lady Blackhawk's mouth.

But the good stuff is overshadowed by the overarcing plotline, which depends too much on two veteran heroines acting like rookies. Stupid rookies at that. And I'm just not caring about Black Canary and her ties to Lady Shiva. Once again I'm going to be asked to believe that a woman who has faced the wrath of Darkseid thinks she can't handle a fighter who knows a few more moves.

If we're going to have a team of six regulars, some of whom are seriously super-powered, bigger challenges are needed. Perhaps that's what we'll get after this first arc - I certainly can't blame Gail Simone for focusing on Dinah, having had her snatched away from the book last time she was writing BoP.

The artwork this month is by Alvin Lee and Adriana Melo. Some pages are very nice, others suffer from awkward faces. I like Lee's Huntress a lot. Overall, the art is fine - it does the job, and I'd be happy were either guest to get the regular gig, I'm sure that with practice all bumps could be ironed out. Inkers Jack Purcell and JP Mayer  both do a decent job, while colourist Nei Ruffino earns her fee with some fine lighting effects. I would, though, like someone in Production or Editorial to sort out the (gratefully received) character bios that appear on page - the writing gets so tiny, and in the case of Dove, unreadable due to the colour scheme.

The cover is by Alina Urusa and it's rather nice, in a Seventies Marvel Black and White Magazines sorta way. I'd like it more if the figures had a convincing relationship to one another.

I'll be back next month, hoping for a clean ending to the Canary shenanigans. I'm looking forward to this book settling into a fresh direction promised by the new legend, in which the Birds are the go-to-gals for the heroes of the DCU. Meanwhile, there's enough to enjoy to make me feel I got my money's worth
Birds of Prey #5 review