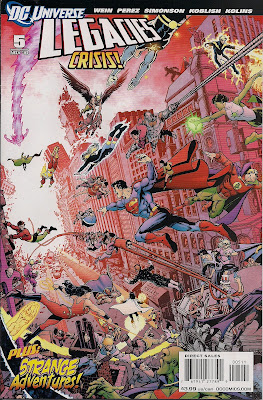 Police officer Paul Lincoln never made detective.
That's not surprising as we watch him see Green Arrow debut his second costume on TV and, a minute later, in another news report, he sees Ollie Queen - modelling the same ridiculous, and brand-new, beard. Does he make the connection? Nope. Soon afterwards, he notes that black-haired acrobat Robin, leader of the Teen Titans, has gone, to be replaced by black-haired acrobat Nightwing. Does he, for one second, consider that it's the same guy, in a different suit? Even after noticing that the Robin with Batman seems younger than previously? Nah.
Mind, this is the DC Universe, in which no one questions Clark Kent wearing identical outfits to work, year in, year out.
The main thing is, Paul certainly knows how to tell a story, here narrating the doings of DC's Bronze Age of heroes which, we're told, began with the deaths of the original Doom Patrol. That fits rather well as the point at which the DC Universe began embracing shades of grey, what with the Spectre's turn for the vengeful, the Joker remembering that he's a killer and invasions by dreadfully scary aliens.
The notion of a darker DCU isn't over-emphasised by writer Len Wein, which makes good sense since these years also bring the debut of the light-hearted Blue Devil and colourful cub Firestorm. There's also room for a not-especially relevant sequence involving Superman vs Chemo, but as Wein gave us such a fun Superman/Metal Men/Chemo story back in DC Comics Presents #4, I'll let it pass.
And the Metal Men are here too, along with the Charlton heroes, the second Doom Patrol, the Outsiders ... I loved seeing all these fellas again and hope younger readers got a kick out of it too, and will seek out some of the great stories readily available.
Alongside the heroic battles, climaxing in the Crisis on Infinite Earths, there's Paul's personal narrative, which shows us how the man in the street reacted to the red skies, other than to run into the foreground, screaming. It also demonstrates that his nogoodnik brother-in-law, Jimmy, finally makes good. And he does so not because he gets a lecture from Superman or Wonder Woman, as would once have been the case (and indeed was, for Paul in the first issue) but because he's learned a lesson or two. I like that.
And I love that George Perez illustrated most of this issue - not only was he the mainstay of Crisis on Infinite Earths, he drew Firestorm, the Justice League and the New Titans too, so it's fantastic to see him tackle these characters again. The layouts are imaginative, dynamic and inker Scott Koblish ensures everything looks crisp. I don't doubt these gents had eyestrain after working on this issue, with the dozens of characters and backgrounds to fit in. Ditto talented colourist Allen Passalaqua, who has the pages pulsating with power.
There's even room for odd Easter eggs, such as the name of a jewellers, or the legend on Paul's apron - little things that add up to big fun.
A nod, too, to letterer Rob Leigh, whose way with fonts ensures we 'hear' everything that's said, and framing sequence illustrator Scott Kolins and colourist Mike Ativeh.
Speaking of the opening, I was fully expecting it to be revealed in the final issue that Paul is telling his tale to Clark Kent - is there a more appropriate figure than the original DC superhero reporter? But take a look at the reflection in Paul's specs ...

It's Mr Bones, cigarette-addicted DCU spy guy ...
... or maybe just a bit of symbolism in the coffee. All theories etc.
Len Wein is also the author, once again, of a back-up strip, less-related than usual to the main story. It's a heck of a lot of laughs, though, as Silver Age space heroes Adam Strange, Captain Comet, Space Ranger and Tommy Tomorrow face a horde of villains from Adam's past, including one brandishing a cosmic vacuum cleaner. It's a straightforward, light-hearted romp with a delightfully fluffy script. What lifts it above the realm of the thoroughly decent is the artwork of Walt Simonson, which is as dramatic, open and expressive as ever. His usual letterer, the great John Workman, also puts in appearance, and Allen Passalaqua is back to colour the adventures on other worlds.
Add in the simply spectacular Perez cover and you have a gorgeous comic which pleases by revelling in DC's complex history rather than being dragged down by it.
Adam Strange Allen Passalaqua Captain Comet DC Universe DC Universe Legacies #5 review George Perez Legacies Len Wein Mike Atiyeh Scott Koblish Scott Kolins Space Ranger Tommy Tomorrow
Location: Edinburgh, City of Edinburgh, UK