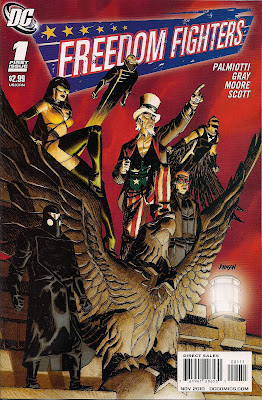 They've had a couple of limited runs and now the Freedom Fighters are let loose in an ongoing series. This first outing is a busy wee thing, with three separate threats sorted before we even get to what looks like being the first featured storyline.

The mini-adventures provide a fine showcase for the players' characters and abilities. In Arizona, Black Condor and Firebrand show up some of those super-powered neo-Nazis seemingly churned out by a factory somewhere in the DC universe. With the Aryan Brigade attacking a Native American casino there's reason to recap Condor's Navajo background, while Firebrand's narration lets us get inside his head while seeing his fighting style.

Out in space, meanwhile, the Human Bomb proves he's a pretty humane homme when he refuses to kill extraterrestrials whose home is a threat to Earth.

And in West Virginia, Phantom Lady and the Ray take on a super-intelligent bacteria from another dimension - glorying in the name Plasmodia - who's doing thoroughly unpleasant things to the local populace. Phantom Lady shows her knack for creative solutions, while the Ray has a blast. Then Spirit of America Uncle Sam shows up to demonstrate his particular talent - super lectures.

The team are together for the second half of the book, in which writers Justin Gray and Jimmy Palmiotti make history fun as they present an arcane conspiracy the Freedom Fighters must stop. The set-up is one of the most complete I've seen in superhero comics - rather than a quick 'there's a Civil War-era weapon of mass destruction, go get', the writers go into such detail that the players and threat convince (look up one Jacob V Holston on Google and, like me, you'll laugh at the possible derivation of that name). It's impressive, interesting, providing a solid foundation for the antics to come. It also lets us know which Freedom Fighter is the conspiracy nerd.

Briefing over, the team are in the field, looking for a mystic artefact and, of course, they get more than they bargained for. Cue cool cliffhanger.

This is a spiffy debut, with more going on than in a year's worth of some books. The unique selling point - heroes not tied to any one US city, stories taking in politics and history - is immediately foregrounded. The large cast is kept distinct and plugged into the big story, and I only want to know more.

Travis Moore looks to be having a ball with the pencils, relishing the chance to move from the deserts of the United States to uncharted space, also taking in a typical small town and the White House. While he's saddled with having to pencil some particularly unattractive costumes - I'm looking at you, Firebrand, Black Condor, Human Bomb and the retooled Ray - he keeps things looking good with plenty of dynamic poses and enticing angles. Adding to the pages' power are inker Trevor Scott and colourist Rob Schwager, while Travis Lanham does a grand job on the lettering.

I'm normally a big fan of Dave Johnson's covers, but this one doesn't do it for me, even though I like the idea of the Freedom Fighters giving us their version of a Batman/gargoyle cover. Somehow the characters feel too distant, their presence muted.

All in all, though, this is a sterling first issue. If you've not tried it, free up some cash and do so.
Freedom Fighters Freedom Fighters #1 review Jimmy Palmiotti Justin Gray Rob Schwager Travis Moore Trevor Scott