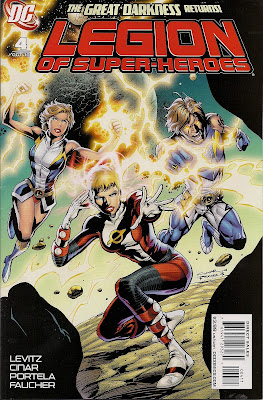 When a feature has been running as long as has the Legion of Super-Heroes, it's unlikely readers are going to agree on  a single high point. Yet there seems to be widespread agreement that the Great Darkness Saga - in which Darkseid was reborn in the 30th century - is it.

It takes a brave writer, therefore, to revisit the scenario, as comparisons with the Paul Levitz/Keith Giffen arc are inevitable. Happily, Paul Levitz is again writing the Legion, and he's not in the least intimidated by himself. So it is that this issue sees disciples of the dread lord of Apokolips bidding to bring their master back from the ether. The totems they hope will summon the New God are Graym and Garridan, twin sons of Lightning Lad and Saturn Girl and once the object of Darkseid's evil attentions.

Of course, Garth and Imra Ranzz aren't going to stand by while their kids are sacrificed and, aided by Lightning Lass (aka Auntie Ayla), they mount a desperate rescue. Highlights of this include the latter making like a defibrillator and Saturn Girl showing just how scary her mental powers make her. Lightning Lad, if anything, will be remembered for showing off his own powerful mind (click on image to enlarge/giggle). 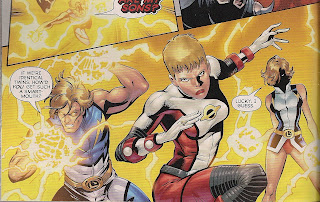 I guess Garth's a tad confused after that time his sister impersonated him to make his colleagues think he'd come back from the dead, only to be betrayed by her lack of an Adam's apple ...
Anyway, the rescue mission is a wonderful spotlight for the abilities and relationships of these longtime Legionnaires. The newest member also gets a showcase, as he has every month since this latest series began. Yup, it's Kirk Niedrigh again, still teasing his many fans as to whether he'll settle down as a Legionnaire, or continue to be an Earth-Man behaving badly. Levitz is certainly making this previously vile character more palatable, but the sooner his vacillations are over, and he's either properly in or out, the better. Out would suit me, so I never have to look at his stupid mutton chops and Desperate Dan chin again.
Having turned down the chance to be a Green Lantern, Niedrigh further refuses demands from his xenophobic sponsors to 'eliminate' the refugees on Earth from the recently destroyed world of Titan. He flies off to do things his way, and looks set to embroil a Legionnaire in his murky plans - mind, said member, Shadow Lass, is no naif, she'll likely twist him around her little finger.
As for the Green Lantern sub-plot, it's reduced to Blue Sperm Man Dyogene and 21st-century holdout Sodam Yat witterring on about the future of the Corps. Give me a second while I see if I could care less ...
... nope.
The dour Daxamite has started referring to himself as 'Sodam Yat the Miserable' and I so agree. He should look up DC's existing poster child for superheroic depression, Pariah, and go play among the cosmic traffic. After all, this is meant to be the Legion's book, not another pesky Green Lantern spin-off.
The Titan business gives us the issue's third story strand, as the seers of a (suddenly non-platinum blonde) Dream Girl's home planet, Naltor, agree to take in some of the refugees, in the hope that the displaced Time Institute will come too. Back on Earth, the Legionnaires - primarily Sensor Girl and Cosmic Boy - bid to learn what plots are being made against the survivors, to no avail.
Another event happens this issue which had me grinning broadly - the Legionnaires call an election for a new leader, something which always makes for fun times. If reader votes are being solicited, I'm forming the Anyone But Earth-Man Party.
With Levitz at the top of his storytelling game, and dynamite art from Yildiray Cinar, Francis Portela and Wayne Faucher, this is another excellent entry in the Legion Chronicles. If the artistic split is the same as in the last few issues, Faucher is inking Cinar, while Portela inks his own pencils. Whatever, the pages, coloured by Hi_fi and lettered by Sal Cipriano, all look good. And the cover by Cinar, Faucher and Hi-Fi is a keeper.
Glancing at the pages again, it seems as if, moreso than usual, sequences have been split across the book rather than playing out at length - scenes changes in mid-flow and pick up exactly where we left off - but it doesn't hurt the comprehension. I could be wrong, though ... perhaps it's simply Levitz experimenting with pace.
While the Legion looks to be moving out of its parallel Adventure Comics slot, which is reinterpreting the team's earliest years, so long as this book is around to tell all-new adventures, I couldn't be happier.
Well, maybe a little (hint: can Earth-Man).
Francis Portela Legion of Super-Heroes Paul Levitz Wayne Faucher Yildiray Cinar