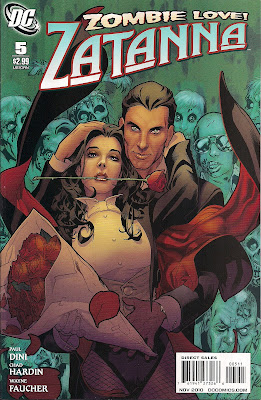 That's a superb cover by Stephane Roux, nicely reflecting the interior in which long-lived casino owner Benjy Raymond bids to keep his soul by delivering Zatanna's up to the demonic Mammon. Zee, meanwhile, is busy trying to improve her relationship with cousin and protege Zachary Zatara.

I love Zatanna. Stunning as Zee is, she's the magician next door, the mystic you're most likely to go for a beer with. And that's why it's so great that she finally has an ongoing, in which we can enjoy her special mix of magical and mundane. The mundane is represented here by the dive in which Zach is booked to perform, so very different from the massive casino showcasing Zee. The magical ... well, everything else. This issue includes a trip to hell, a clever trick with a swimming pool, flight, teleportation, a love potion - there's a lot going on, but writer Paul Dini paces the action perfectly.

Zee gets physical this month, something she should do more often when she can't cast a spell. And I like that while she's happy to let the battle come to her, and never fazed, she's not overconfident.

The one off-note is a reference to the hugely unfortunate Identity Crisis series - the night that Zee missed Zach's stage act after promising to be there just happened to be when 'that horrible business with poor Ralph and Sue' occurred. Zee considers their deaths horrible, yet in this series we've seen that she includes a skit involving Sue's rapist, Dr Light, in her show. Weird.

Chad Hardin pencils, Wayne Faucher inks and together with colourist John Kalisz, produce some fine-looking pages - sharp, sleek and vibrant. The layouts are thoughtful, and Hardin gives Zee a necessary boob reduction (those first issues by Stephane Roux were lovely looking, but the tits were more intimidating than any demon). 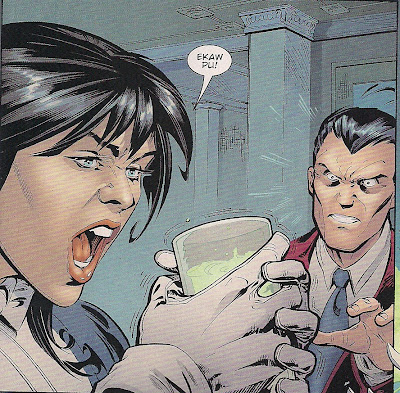 There's a touch of the Brian Bolland to the rendering of Zee's face, which has to be good, and a nice line in possessed casino folk. Zombies, too, look splendid, while Zach and assistant Bunny are a good-looking pair. Even bright red and bloated hellspawn Mammon has something ... it's not something I want, mind. I'll be content with next issue, when this story is, as letterer Pat Brosseau wittily renders it on the final page, deunitnoc.
Chad Hardin John Kalisz Paul Dini Stephane Roux Wayne Faucher Zatanna #5 review