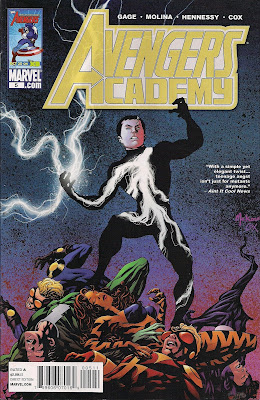 Goodness, isn't that the best cover with a hero surrounded by lightning and a quote from Ain't It Cool News ever?

Apart from this week's Hawkeye & Mockingbird #5.

Anyway, coincidences in editor Bill Rosemann's offices aside, what is there to say about the comic? Plenty, as writer Christos Gage continues to write the best young heroes title around. The focus this month is, as Mike McKone's striking cover makes clear, Stryker, the young fellow with electricity-hurling tendencies. We follow him over the course of a week at Infinite Avengers Mansion, as he trains, relaxes and helps take down one of Hank Pym's oldest enemies.

We're also shown the background that makes him the complex young man he is today - rubbish money-grabbing mother, abusive manager, that sort of thing. It all makes for a convincing sketch of someone who could become a hero or a villain. He certainly tips in one particular direction this time, but it's early days.

Stryker's fellow students and teachers are also around, all helping give Avengers Academy the flavour which makes it stand out from the franchise crowd. As ever, there are plenty of little moments revealing extra layers of personality, while at least one new subplot - involving my old favourite she-bot, Jocasta - is laid down.

Regular artist Mike McKone is absent this issue, but inker Andrew Hennessy remains, teamed with penciller Jorge Molina. It's puzzling, when they teamed up for Avengers: The Initiative #34, I was cock-a-hoop; the art looked great all round. Here there are some very odd bits of facial business - malformed noses, dodgily frozen open mouths, Steve Rogers' unfeasibly odd head ... let's assume some sort of deadline crunch, as is often the reason for fill-ins. Plus, this is so much McKone's book visually that I wonder if Molina wasn't trying too hard to capture his vibe.

The layouts are actually pretty decent, with some clever angles and dynamic action moments. Hopefully Molina will get to come back next time a fill-in is needed and show just how fine he is - God knows, I have my own off days.

And some minor art quibbles aren't going to stop me recommending this as the twistiest, turniest comic this side of vintage Suicide Squad. If you've still not tried Avengers Academy, jump on board with this issue - I think you'll enjoy an unexpected ride.
Andrew Hennessy Avengers Academy Christos Gage Jorge Molina