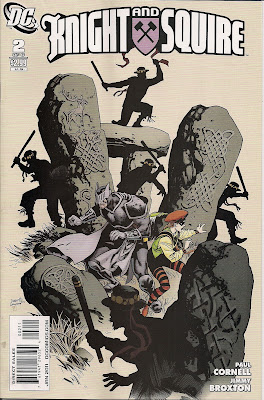 I can't remember the last time, while reading a comic, that I paused at every other panel to share a moment with my non-comics reading pal Steve*. That's how it was with this issue, which sees Beryl - Squire in civvies - on hand as a newsagent sends a rubbish supervillain packing. It seems that costumed kooks regularly show up in Great Worden, known as the home of Britain's greatest superheroes, but the Knight and Squire don't turn up much. If at all. So when shopkeeper Mr Patel is confronted by the Organ Grinder and Monkey, he's not impressed.
As well as the incongruity of a ludicrous supervillain duo in a rural English town, what I love here is the detail writer Paul Cornell and artist Jimmy Broxton put into the scene. Little Worden is no chocolate box vision of thatched cottages and manors, but a very real-looking place, combining boxy utilitarian shops with modest but well-kept housing estate homes. Mr Patel's store is filled with such nuttily plausible titles as Blimey! and Joy of Sheds, and the magazine Beryl's buying for her partner, Total Castle. The other customers could have walked in off my front street, while the background contains amusing, but unobtrusive, little jokes.
Such a picture of Britain is a far cry from the days when Marvel Two-in-One would have the Thing pass through a version of London's Charing Cross that was more medieval hamlet than metropolitan district. The recognisable reality grounds the adventures of the Knight and Squire, making the more outlandish elements even sweeter. 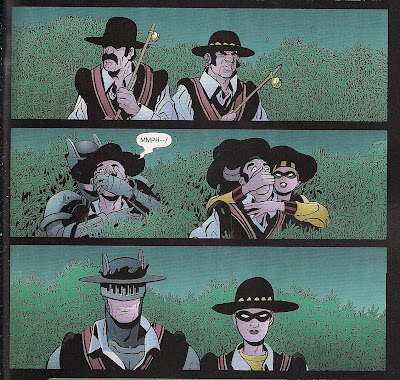 Such elements this time include a mob of Morris dancers out to destroy modern England and a motorcycle that doubles as sniffer dog. But as indicated at the top of this review, every page contains something to delight: a smart piece of dialogue, an Easter egg or 'just' a straightforward moment of action such as the street fight with the Morris Men.
One refreshing item of business is that everyone seems to know Beryl is Squire, but no one makes a fuss. That just wouldn't be British. Plus, Beryl's mother is a good sort, unperturbed by her student daughter's extracurricular activities or the coming visit of a possibly superheroic suitor.
As for Knight, other than that he seems to live in the local castle - artistically based on Dorset's Corfe Castle, I'd say - we don't learn much more about Cyril Sheldrake. The information that's new to me is that at some point he stayed with Beryl's family, and the contents of the, er, Castle Cave (including the almost inevitable British Bulldog).
I'm sure we'll find out more before this six-issue mini is up; meanwhile, I'm thoroughly enjoying the stories, which, while filled with affection for British people and traditions, don't shy away from noting that we have our share of intolerant bullies and nutters.
Paul Cornell is on winning form here, with a script that shows why he's such a well-respected and loved writer (never mind the terrific comics, if you've never seen his Doctor Who episodes, hunt them down - and be ready for some emotional gut punches). Characters and situations are economically sketched in a satisfyingly complete tale that sits as part of something bigger, more ambitious.
And Jimmy Broxton's artwork just gets better. The man is blossoming with every page ... after two issues, he owns these characters. Spending time with Broxton's Knight and Squire out of costume brings us closer to them - Cyril, nice-looking but not unfeasibly handsome, Beryl, pretty, intelligent and confident in her stance. They really could be two people you'd meet on the street. The tussle with the Morris Men flows well, while the conclusion at a stone circle is a moody treat.
Guy Major's colours are perfect for the story, while Steve Wands, as well as lettering, collaborates with Broxton on the hilarious Total Castle cover, which is highlighted on Cornell's text page helpfully expanding on references that may be new to non-UK readers. Yanick Paquette and Michel Lacombe's cover has a lyrical quality to it, and is all the better for the daringly muted, entirely apposite tones of Nathan Fairbairn.
Editor Janelle Siegel deserves credit for overseeing a comic that sits somewhere between the regular superheroics of the DC Universe and the eerie naturalism of Hellblazer and co. Knight and Squire is a delight, and I really hope we see at least another mini after this series wraps up.
+++++++++++++++++++++++++++++++++++++++++++++++++++++++++++++++
* Nevertheless, Steve likes to take a weekly look at the covers - Knight and Squire #2 gets a mention: http://www.youtube.com/user/edisteve#p/a/u/0/8InfuVZlEoo
Guy Major Janelle Siegel Jimmy Broxton Knight and Squire Michel Lacomb Nathan Fairbairn Paul Cornell Steve Wands Yanick Paquette