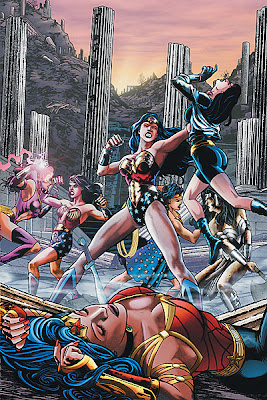 'Every era somehow finds a way to create you.' So says Dr Psycho to Diana in a spot of meta-commentary after showing her a series of lives which, he claims, she once lived. We see Diana as the blind leader of a city of outcasts, a pirate queen, an African princess; life after life until we reach one which begins with a clay statue on a moonlit beach ...
The common denominator in these lives is that Diana is ever the fighter for justice, leading the downtrodden against their oppressors. The fact that they don't chime with the current Diana, that no flame of recognition is sparked, makes it seem as if Dr Psycho - one of Wonder Woman's oldest enemies - is simply messing with her head.
But Diana's effect on him has me believing his words. He's presenting himself to her as a suave fellow in a suit, not in his true form, and when Diana asks him who he is, he reveals himself as the man who was her enemy. Which begs the question as to why he's helping her now, showing her that she can be a Wonder Woman if she chooses, warning her against 'the immortal force aligned against you'.
He has his reasons, and they make perfect, pathetic sense.
This is a fine issue, emphasising the spirit that makes Diana a Wonder Woman in any era, even as it hurtles towards a very intriguing ending that shows we're not quite there so far as the return of the true Wonder Woman is concerned. The cliffhanger comes after Diana has overcome a series of barriers to her reclaiming the life she was meant to have, in a meaningful action sequence that's a breath of fresh air after her role as passive listener in the first half of the issue.
Some might baulk at the bigger picture being painted for Diana by a villain, upset that he knows more than Diana who, with her connection to Truth, might be expected to sense that her 'reality' is a lie. But bringing in Dr Psycho makes for an interesting story, and who's to say that a man whose modus operandi has always been to distort the truth wouldn't be able to see through the lies of gods?
Phil Hester's script is well judged, with the encounter between Diana and Dr Psycho (here preferring his given forename, Edgar) quietly compelling. The last third of the issue sees Diana's internal narrative come into play, and her words are inspiring wthout being over the top.
Pencilling the issue - the whole issue, for once - is Don Kramer and it's good work. The previous versions of Diana are nicely depicted, but there's nothing as warming as seeing him draw some familiar faces who show up. Wayne Faucher and Sean Parsons ink effectively, with the sequence showing Diana's efforts to reach an island temple especially striking. And the cover, by Hester and Chris Beckett, is lovely. Misleading, but lovely.
The lettercolumn promises that everything will be wrapped up by #612, and as a non-fan of J Michael Straczynski's apparently junked masterplan for a new Diana, it's an issue that can't come soon enough for me. But so long as Hester is writing, the instalments before that should at least be entertaining.