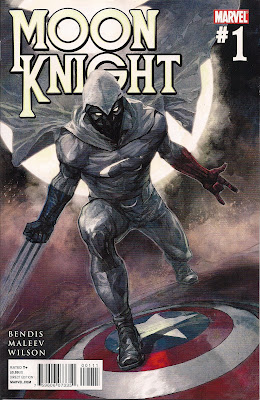 I do like an ending that turns a debut issue on its head. Heroes for Hire had one recently. In the Nineties, Thunderbolts had the best ever. And there's a twist in this latest phase of Moon Knight, an interesting wrinkle that was, sadly, given away in publicity for the series.
I might have guessed it, and had I done so, that would have felt good. But going in knowing a key plot point meant I was impatient for the beans to be spilt, and they weren't until the final page. Still, you can't blame Marvel for having Brian Michael Bendis talk about his new take before we see it - Moon Knight's had so many failed runs that knowing there's a different hook this time can only help initial sales (and a $3.99 price tag for 34 pages of story can't hurt, either). Without giving everything away, the new approach has much to do with Moon Knight's current status as an Avenger.
Marc Spector, Moon Knight, has moved to Los Angeles to begin a career as a TV producer. His first show is Legend of the Khonshu, and the extract we're shown is a clever way to bring new readers up to speed on Moon Knight's origins. Soon, though, he's out on the streets, crashing an underworld deal gone wrong and going one-on-one with Mr Hyde. He barely survives, but escapes with an artefact that hints that LA's mystery kingpin has power to spare.
The script by Bendis is efficient, enjoyable. He spells out Spector's new status quo with clarity, while leaving Moon Knight's air of mystery intact. He provides a fine action sequence and introduces a couple of wise guys who have personality without being Central Casting smartarses. And he gives longtime artistic partner Alex Maleev - you may remember their run on Daredevil - plenty of room to strut his stuff. There's one sequence where Bendis hits the Silent switch and Maleev, partnered with colourist Matthew Wilson, conveys the story points nicely.
Maleev tweaks his style, eschewing the usual photo realism for looser, scratchier, more dynamic lines that honour the doyen of Moon Knight artists, Bill Sienkiewicz, whose Eighties run with writer Doug Moench remains the high watermark of the hero's career. There are moments that don't quite work (Maleev's Captain America is a little sticky), but overall this is a great-looking comic, especially when Maleev really cuts loose with massive splashes that explode off the page.
I'll be back next month to see how Moon Knight's story develops, now we're up to speed with what's going on in his famously schizophrenic head. And if you're not intending to try the book and want to know, well, it's out there on the net ... and the cover above drops big hints. Speaking of which, it's good to see the logo from the Eighties back, evoking that classy, original run. It looks like this one may be classy and original too.
Alex Maleev Brian Michael Bendis Matthew Wilson Moon Knight Moon Knight #1 review