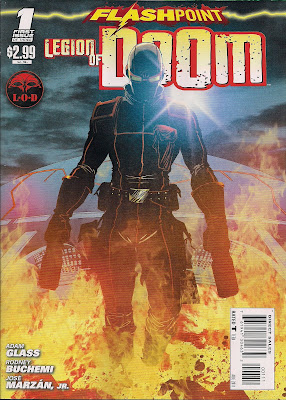 The Legion of Doom is a name that warms the cockles of a generation, the fans who followed Luthor, Sinestro and their dastardly acquaintances on the Challenge of the Super Friends cartoons. Me, not so much - I don't think those shows ever reached British TV.
Still, the high quality of Flashpoint tie-ins to date was enough to persuade me to take a chance on this comic. Had I noticed that the guy on the cover is Flash rogue Heat Wave, I'd have been slightly less inclined to pick this up. A few years ago writer Geoff Johns retooled him as a fire-fixated psycho, a regular Johnny One-Match. Since then he's been rather too 'oh, pretty flames' for my liking, and while this comic takes place in a tweaked DC Universe, it's recognisably the same fella.
So as the book opens, he burns Jason Rusch to death in the hope he can join Ronnie Raymond as half of the Nuclear Man (apparently not getting that Firestorm's hot head is simple decoration). Ronnie looks to be in big trouble when Cyborg appears and roundly dispatches Heat Wave in an entertaining action sequence. Interestingly, Cyborg seems to be using New Gods technology. Or at least better SFX (click to enlarge image). 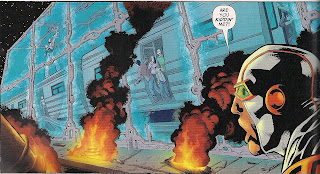 And that's where much of this story takes place, with Heat Wave narrating a tale that seemingly wants to be Oz for the Flashpoint world. The only real Legion link is the appearance of a prison, The Row, based on the old Hall of Doom, which rises - rather randomly it seems - from a swamp. Other villains do have roles (Amazo as prison guard, Cluemaster as stooge, Mr Zsasz as prison annoyance) but I don't believe any were ever Doomed souls. The story is basically another Heat Wave spotlight which only surprises in the final two pages.
Darn, that's me buying next issue.
It's not that the script is bad - Adam Glass does a thoroughly decent job of giving us a Johns-style villain focus - it's just that more than any Flashpoint stories so far, this felt like a regular DCU book. Tough-talking, maiming, murder - that's just your average issue of Brightest Day. What I wanted was a compelling insight into the changed world, but we have to make do with a brief mention of the Amazons and Atlanteans, and Cyborg finally showing he's the big hero his Flashpoint PR claims. With luck, next issue will see the villains take over The Row, and become a true Legion of Doom. The question then would be: whose side will they take in the great war?

Rodney Buchemi's pencils serve the story well, bringing out all available drama, and showing us the desperation, the hate in prisoners' eyes. Jose Marzan Jr is the perfect inker, having spent years on the Flash strip, and his blacks add plenty of weight to the pages. My favourite piece of art, though, is Miguel Sepulveda's cover, coloured by Jose Villarrubia, which carries a tremendous sense of foreboding.
Flash fans are likely to enjoy this book more than most, Legion of Doom nostalgists can give it a pass. But of course, that could all change next issue, if Toy Man and Giganta turn out to be running the prison canteen ... hang on, didn't Tiny Titans already do that?
Flashpoint Jose Marzan Jr Jose Villarrubia Legion of Doom #1 Legion of Doom #1 review Miguel Sepulveda Rodney Buchemi