It's a day in the life of Aquaman, as the hero stops a robbery, fails to have a peaceful lunch at a diner and tells wife Mera he has no wish to rule Atlantis. Meanwhile, down in the depths, something is stirring. Something with very sharp teeth. And a newfound appetite for human flesh ...

I like this first issue a lot. For one thing, it points out that as a hero able to survive in the deepest pits of the ocean, Aquaman is no milksop on land - his skin is tough enough to take bullets, his strength great enough to toss trucks around and his legs powerful enough to leap tall buildings at, well, not quite a single bound, but no more than a couple. Safe to say, the police of Boston are impressed, and the criminals cowed.

Job done. Aquaman is, as they say, a 'badass'. He's stopped some bad guys and earned his lunch, fish and chips at the diner his dad used to take him to. And that's when the book takes a misstep, though not a fatal one. Writer Geoff Johns is so keen to demonstrate that Aquaman deserves his place in the big leagues, alongside the likes of Superman, Batman and Wonder Woman, that he overeggs the pudding. He has a thoroughly annoying blogger (no, not me) interrupt Arthur Curry's lunch to put it to him that, actually, he's rather lame. That's after the guy's pal has forced him to explain that he doesn't talk to fishes, he pushes them telepathically to do his will.

Suffice to say, Aquaman puts the blogger right, but the scene is altogether too meta. It's Johns answering the lazy comedians who maintain that 'talking to fishes is lame'. We've already seen that Aquaman is impressive, now's the time to let the rest of Aquaman 101 emerge along with the rest of the story.

The scene doesn't wreck the book, I enjoy seeing Aquaman among ordinary people, but it feels thoroughly unnecessary. Showing is good, as in the earlier scene, telling, rather less so. Plus, why would Aquaman be considered a joke in the DC Universe? Is 'talks to fishes' any dafter-sounding than 'dresses like a giant bat' or 'has a magical glowing ring'? At this stage in Aquaman's career he's been a hero for years - the general public would not consider him a laughing stock, they'd see him as someone who regularly saves their skins.

Aquaman's scene with Mera, at their lighthouse home, is much better, demonstrating - with the aid of Ivan Reis' superb pencils and Joe Prado's luscious inks - the love between Mr and Mrs Curry. And the arrival of the toothy hybrids seen on the cover is chilling - Reis and Prado really know how to make a scene work.

And they surely know how to draw a formidable Aquaman. He's a big, confident guy with as much presence as any of his fellow Justice Leaguers. And as coloured by Rod Reis, he shimmers like a god. The talented Reis employs a wide variety of tones to set off the artwork. I especially like his naturalistic daytime colours, and the background used to show Aquaman's mood darkening. 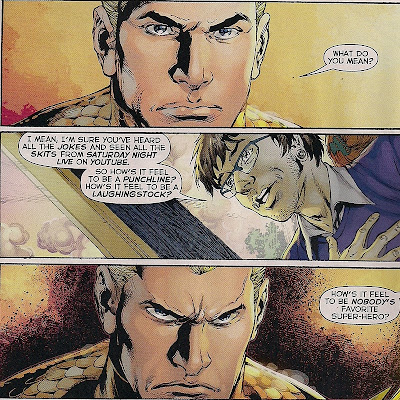 As Aquaman #1s go - and it feels as if I've read dozens - this is up there with the best of them, setting the scene for interior and exterior conflicts that look likely to be compelling. Just don't try so hard, OK Geoff?
Aquaman #1 review DC New 52 Geoff Johns Ivan Reis Joe Prado Rod Reis