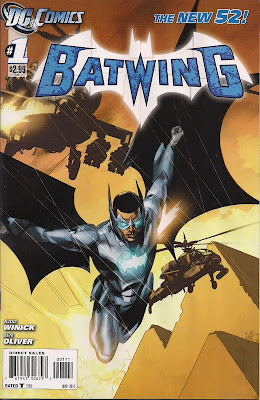 Anyone old enough to remember the slogan: 'DC Comics aren't just for kids'? That would be this comic. The cover rating is T for teenagers but I'd not be happy giving this to younger teens. It's bloody stuff - severed heads, messages written in spatter ... not what you expect in your average Bat-book.

Then again, this isn't your average Bat-book. It's a lot better. Having been briefly introduced in the pages of Batman Inc, Batwing - 'the Batman of Africa' - here gets his chance to fly. And while he may be new, he's good, holding off the monstrous figure of Massacre as this issue opens.

Most of 'Cradle of Civilization' is set six weeks earlier, when Batman was hanging around to help Batwing get used to his new Batman Inc equipment. When he's not with the Gotham Guardian, Batwing is in his other identity of David Zavimbe, officer in the Tinasha Police Department. It's a corrupt body, but a few cops are trying to make a real difference, chief among them Kia Okura, for whom David has a soft spot. She picks up on a clue left by David at a recent massacre site, one Batwing and Batman are working from another angle - one of the dead men was Dede Yeboah, the former superhero known as Earth Strike. By the end of the issue the police have gotten close to the killer - too close ...

Just imagine Alexander McCall Smith writing the most brutal Batman comic ever and that's what you have here. David's gently detached narration brings to mind Mma Ramotswe of McCall Smith's No.1 Ladies' Detective Agency series, but she's never had to deal with the horrors Batwing faces.

Luckily, he's not alone. As well as the support of Batman Inc, Batwing has his own Alfred in Matu Ba, who rescues chlld soldiers. His body language, as well as an emphasis in the narration ('currently in my service'), though, hints that perhaps he's not to be entirely trusted. Ba compliments David on his intelligence, and in Judd Winick, Batwing is lucky enough to have a writer who can convey that quality. There's a wisdom to his narration that rings true without being either teeth rotting or smug. This is a good man in Africa, an idealist, and I look forward to spending time with him.

Drawing Batwing is Ben Oliver, whose photo-realistic style is perfect for bringing Africa's little-seen superhero side to life. He makes Batwing the weird figure he should be, a technical marvel who nevertheless fits right into the landscape of the Congo. The action sequences are intense, the workaday scenes convincing, the massacre vignettes appalling. Add in Brian Reber's beautiful colours and you have a superb-looking comic.