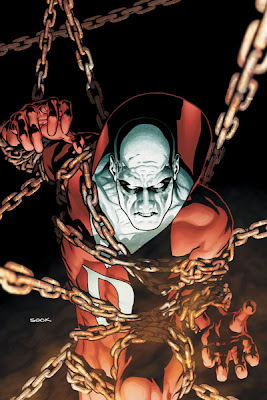 Caught between life and death, Boston Brand enters the bodies of people in times of crisis, helping them find the right path. At the same time the former circus aerialist, selfish and arrogant in his lifetime, is finding his own way - to redemption

That's the set-up for this five-part mini-series within a series, by the team of writer Paul Jenkins and artist Bernard Chang. Created at the end of the Sixties, Deadman has long been a fan favourite rather than a star and it looks as if DC recognises that his appeal is likely to remain niche (unless the mooted TV show turns up and takes off). It doesn't mean he can't star in the occasional decent short run.

And it looks as if we're going to get just that in this showcase title, as Jenkins, Chang and their collaborators get the series off to a very satisfying start.

Jenkins' script accomplishes a lot in 20 pages, showing us Deadman helping a stunt rider with a death wish, recapping his origin, presenting some of the other people he's helped, introducing us to the maimed soldier who's next on his list and a fortune teller freaked out by actual psychic phenomena, and springing a fine cliffhanger. Deadman's voice seems unchanged by the DC New 52 revamp, he's the streetwise guy with a side helping of melancholy. There's no moaning about his plight, he just gets on with helping others. Happily, there's no reference to the Brightest Day guff of the last year, though there's a hint that Barbara Gordon may show up soon ... I may be reading too much into a single line of dialogue, mind.

The origin is pretty much as it's always been, with Boston murdered over the centre ring by a mystery gunman. Rather than move on, his spirit appears before eastern goddess Rama Kushna, who tasks him with helping 'the weak and the sad, the hopeless and the fearful'. Once he's done enough good, he'll find enlightenment. The only real difference is in Rama's explanation of ascendance, and the visual representation of Deadman's path to it; it's not a massive alteration, and I like it.

The script is dense, but not over-wordy. Jenkins is approaching the story as a character study, giving Deadman depth without overwhelming the art

And thank goodness for that, as Chang's art is not to be missed. For one thing, he draws a great Deadman, his classic look barely changed (guess what has been tweaked? Yup, the collar, but it's not too scary). So far Chang's only required to show us the brooding, intense Deadman, but having seen his DC work on the likes of Supergirl and Wonder Woman, I don't doubt he'll capture the more wry side of Boston should the chance come.

Chang's also very good when it comes to drawing the ordinary guy, the man and woman in the street (including, on page 14, himself). And that's important in a series more likely to co-star Joe Schmo than a super-villain. Rama Kushna gets a new look, making her more like an Indian goddess than previously. She looks suitably wise and ethereal.

Blond, always fine, ups his game here, turning in an exemplary colouring job. Whether we're in Limbo, Afghanistan or Gotham, he adds the extra touch to Chang's pages, evoking the necessary mood. And Dave Sharpe does a similarly excellent job with the lettering, varying fonts and colours to good effect. Completing the core creative team is Ryan Sook, with a powerful cover image.

If you like your superheroes spectral, give this first issue a try. With quality creators, one of DC's most underrated characters and a story that could go anywhere, it's worth a punt.
Bernard Chang Blond Dave Sharpe DC Universe Presents: Deadman #1 review Deadman Paul Jenkins Ryan Sook